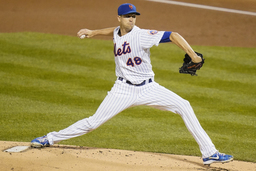 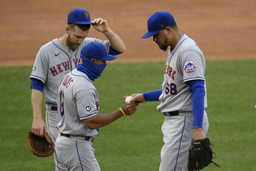 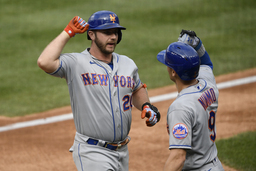 NEW YORK (AP) Like so many things in everyday life this year, little went according to plan for the New York Mets.

And with a change in ownership pending, more upheaval could be coming soon.

After starting 2020 with such high hopes, the Mets finished 26-34 under rookie manager Luis Rojas in a rocky season cut short by the coronavirus. They tied Washington for last in the NL East and missed the playoffs for the fourth straight year - even with the field expanded to eight teams per league.

''That's pretty frustrating,'' said ace Jacob deGrom, who delivered another stellar performance on the mound. ''There's a lot of disappointment.''

With slugger Pete Alonso powering a young corps of rising hitters, a second-half surge last year propelled New York to an 86-76 record and generated optimism. Former star Carlos Beltran was hired as manager to replace Mickey Callaway, and the Mets set about beefing up their pitching staff in free agency.

That's when everything went haywire.

Beltran was let go after 2 1/2 months without managing a single game because he got implicated in Houston's sign-stealing scandal from his time as an Astros player.

New York quickly turned to Rojas and went to spring training in February with six established starters - six All-Star selections and three Cy Young Awards between them - for five spots in what appeared to be a deep rotation.

Then the pandemic hit, and No. 2 starter Noah Syndergaard had season-ending Tommy John surgery. Marcus Stroman was supposed to slide into that role, but he got injured in summer camp and later opted out of the season because of COVID-19 concerns. Veteran newcomers Rick Porcello and Michael Wacha went a combined 2-11 in just 93 innings, and the rotation ended up in shambles.

A mediocre bullpen got taxed as the Mets compiled a 4.98 ERA that ranked 22nd in the majors and 12th in the National League.

''We let some games get away,'' deGrom lamented.

Coming off a long injury layoff, Yoenis Cespedes seemed to be a perfect fit for the new designated hitter slot in the National League. The enigmatic Cespedes played eight games, then abruptly left the team unannounced in Atlanta and opted out of the remainder of the season, also citing coronavirus concerns, according to his agent.

And that was just the beginning in a somber season marked by the death of franchise icon Tom Seaver.

In the end, the Mets stumbled backward to their ninth losing season in 12 years despite bounce-back campaigns from Robinson Cano and closer Edwin Diaz.

''Our defense compromised a couple of games,'' Rojas said.

New York still had a chance to sneak into the playoffs on the final weekend, but lost its last three to the Nationals.

''Not the season that we anticipated,'' Rojas said. ''This is a talented team.''

Mets fans are hoping a new owner with deep pockets will reverse the organization's fortunes.

Billionaire hedge fund manager Steve Cohen recently reached an agreement to purchase the franchise from the Wilpon and Katz families in a deal that values the club at about $2.4 billion.

Cohen announced if the transaction is completed - it is subject to approval from at least 23 Major League Baseball owners - longtime baseball executive Sandy Alderson will return to the Mets as team president to oversee all baseball and business operations. The 72-year-old Alderson was New York's general manager from 2010-18 before stepping down after a cancer diagnosis.

What that means for current GM Brodie Van Wagenen, the former player agent who succeeded Alderson and his temporary replacements, remains to be seen.

''In terms of my own job security, I don't think about that,'' Van Wagenen said.

Perhaps if Cohen takes over this offseason he'll pursue big-money free agents at the top of the market such as catcher J.T. Realmuto, starting pitcher Trevor Bauer and outfielder George Springer. Any one of them could plug a problem area.

In-house, right fielder Michael Conforto is coming off an excellent season and can become a free agent after 2021.

''It's really tough to judge a lot of things with this short season,'' Rojas said. ''I'm looking forward to those conversations. A lot of data that we're going to take.''

New York led the majors with a .272 batting average, ranked second with a .348 on-base percentage and third in OPS at .807. But the Mets had a terrible time hitting in the clutch and finished 13th in runs.

''When we have those tough losses, it's just that little things get to us. So if we can get back to the fundamentals and playing the game the right way, we'll be in a good spot next year,'' pitcher Seth Lugo said.

Poised rookie David Peterson impressed, going 6-2 with a 3.44 ERA and probably earning a rotation spot for 2021.

But with Stroman eligible for free agency and Syndergaard rehabbing, the Mets have several openings on the starting staff - especially after Steven Matz (0-5, 9.68) fell apart - behind the 32-year-old deGrom, who hit 102 mph on the radar gun and topped the NL with 104 strikeouts.

Two players who blossomed this season play positions where the Mets thought they were already set.

Dominic Smith had a huge breakout at the plate, creating a potential logjam at first base with Alonso, who slumped early and came on too late. Young rookie Andres Gimenez flashed all-around talent and great instincts, taking playing time away from a struggling Amed Rosario at shortstop.

With the Mets in dire need of pitching, maybe that makes for trade bait.