Angels to begin another early offseason with GM search 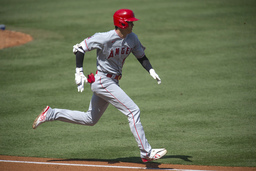 Los Angeles Angels' Shohei Ohtani sprints to first base for his infield single during the first inning of a baseball game against the Los Angeles Dodgers in Los Angeles, Sunday, Sept. 27, 2020. (AP Photo/Kyusung Gong) 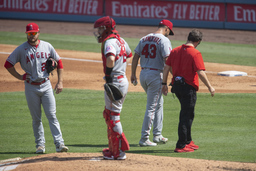 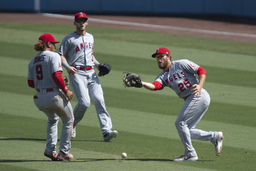 ANAHEIM, Calif. (AP) Several weeks after stumbling out to another miserable start in another dismal season, the Los Angeles Angels finally clicked.

They were among the majors' best teams in September, with a pitching staff that finally backed their star-studded offense. Products of a once-barren farm system supplemented their superstars during an impressive four-week surge that brought the Angels back into the playoff picture.

The Halos (26-34) clicked about one week too late to save their fifth consecutive losing season. A team with a stacked lineup and a huge payroll missed the postseason for the sixth straight year, finishing in a tie for 10th in the AL.

''You look at this team we have right now, it could have been a different story if we played a full season,'' three-time AL MVP Mike Trout said. ''We just got hot a little late, and we fell short.''

It also seems the Angels got it together just barely too late to save the job of general manager Billy Eppler, who got a contract extension in July, but was fired on Sunday.

Eppler was owner Arte Moreno's choice to take the annual fall for his franchise's many failures during a lost decade that ended without a playoff victory for Trout or Albert Pujols. These past two seasons are the Angels' worst since 1992-93 by winning percentage, even after a September in which they played like contenders.

''We were finally making some corrections, and we ran out of runway,'' first-year manager Joe Maddon said. ''But the heart of this group is impressive.''

The Angels started 9-22, and that hole proved too deep to escape even with a subsequent 17-9 surge. The Angels won 14 of 20 games in September before getting eliminated from the playoff race Friday and ending the season with a three-game sweep by the major league-leading Dodgers, who went 6-0 against the Halos.

''Outside of these three games in LA, I'm very happy with how we finished,'' Maddon said before heading off to drive his RV back to Pennsylvania. ''We played a much better brand of baseball. We started getting clearly defined roles. Loved the fight.''

So yet another long offseason begins with a GM search by Moreno, the same owner who gave a $240 million contract to a nearly 32-year-old Pujols nine years ago. Pujols will be the majors' oldest player at 41 next season, when he's scheduled to make $30 million.

If Angels fans aren't exactly sold on Moreno's ability to make the right hire, his next general manager will have plenty of assets left to him by Eppler, along with the ability to do more. The Angels look closer to contention than they've been since shortly after Eppler took over, but the new front office will have plenty of work to do.

What lies ahead for the Angels:

The Angels' biggest weakness was their starting pitching, a perennial problem that ultimately gave justification for the firing of a GM who made progress in many other areas. Yet the current rotation looked solid down the stretch, with Eppler acquisitions Dylan Bundy and Griffin Canning joining Andrew Heaney in a solid core. Options for improving the rest of the rotation are limited due to the free agents available and the Angels' resources in an uncertain economic year, but the new GM will be expected to do something special.

The Angels finished with the fifth-worst ERA in the majors after finishing with the sixth-worst last year. That's largely due to the rotation's woes, but pitching is clearly the Halos' top priority yet again. Eppler has a strong track record of finding undervalued relief help, and he did it again this season by acquiring Mike Mayers, the AL reliever of the month for September. Los Angeles needs more arms and better talent on the back end to have any chance in an up-and-coming AL West.

Andrelton Simmons opted out of the final five games of the season, putting a premature end to his fifth year in Anaheim. Acquiring the four-time Gold Glove winner was a huge early coup for Eppler, but Simmons clearly isn't certain about his future with the franchise as he hits free agency, particularly after David Fletcher's breakout season. The Angels could extend a qualifying offer, likely to be worth about $17 million, with the opportunity to get a draft pick if Simmons doesn't sign it.

Shohei Ohtani has pitched in just two games over the past two seasons due to his Tommy John surgery and his aborted mound comeback this summer. He has said he still wants to be a two-way player, and the Angels expect him to begin a throwing program next month. The Angels' new front office must make a connection with Ohtani, who was persuaded to join this franchise largely by the vision and collaboration set forth by Eppler.