Big progress for Marlins, but they're still chasing Braves 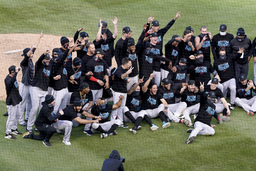 Members of the Miami Marlins celebrate after defeating the Chicago Cubs in Game 2 of a National League wild-card baseball series Friday, Oct. 2, 2020, in Chicago. The Marlins won the series 2-0 to advance to the division series. (AP Photo/Nam Y. Huh) 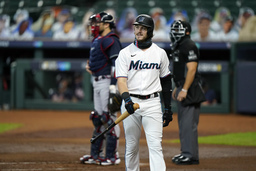 Miami Marlins' Brian Anderson (15) reacts after striking out in the first inning in Game 3 of a baseball National League Division Series against the Atlanta Braves, Thursday, Oct. 8, 2020, in Houston. (AP Photo/David J. Phillip) 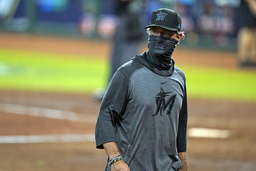 Miami Marlins manager Don Mattingly walks back to the dugout after a pitching change in the fifth inning in Game 3 of a baseball National League Division Series against the Atlanta Braves, Thursday, Oct. 8, 2020, in Houston. (AP Photo/David J. Phillip) 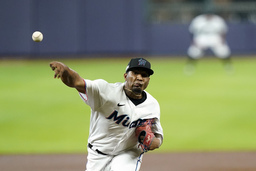 MIAMI (AP) After an improbable run to the playoffs, the Miami Marlins confronted a hard reality in the National League Division Series: They still can't beat the Atlanta Braves.

The Marlins were sent to the sideline later than usual, but forcefully, when Atlanta completed a best-of-5 sweep with a 7-0 win Thursday. The three-game drubbing showed the Marlins their great leap forward this year left them still a ways from overtaking their NL East rivals.

''You have to measure yourself with them, and have to be able to beat that club,'' Miami manager Don Mattingly said. ''We feel like we're getting closer, but they let us know where we're at.''

Despite a coronavirus outbreak that nearly derailed their season, the young Marlins reached the playoffs for the first time since 2003. The breakthrough came one year after a 105-loss season as CEO Derek Jeter's blueprint to rebuild from the farm system up started to pay off.

The Marlins have never won the NL East, and while they're no longer bottom feeders, they're still under water when it comes to Atlanta.

Mattingly is virtually certain to be back for a sixth season in Miami. After providing continuity through the 2017 ownership change and enduring 203 losses in 2018-19, he guided the franchise to its first winning season since 2009.

Starling Marte's impact was evident by his absence - he missed the series against the Braves with a broken left hand.

The center fielder was acquired from Arizona for three players at the end of August, and the Marlins were delighted with the stability he brought to their batting order and defense. He hit .281 with 27 RBIs and 10 stolen bases for the two teams, and led the majors by playing in 61 games.

Marte has a $12.5 million option on his contract for next year, which the thrifty Marlins are expected to exercise.

''I don't think you give up what we gave up if this is a 30-day rental,'' president of baseball operations Michael Hill said when the trade was made.

Jeter's emphasis on developing depth in young pitching began to pay off this year. Right-handed starters Sandy Alcantara, Pablo Lopez and Sixto Sanchez provide a formidable foundation for the staff, and none is older than 25.

The 22-year-old Sanchez, considered a potential ace, consistently reached 100 mph and had a 1.69 ERA in his first five starts. He earned a win against the Chicago Cubs in the wild-card round by pitching five shutout innings.

''I learned that I can help the team,'' the Dominican said through a translator, ''and that I've got the tools to keep helping the team in the future.''

Three top prospects -- Edward Cabrera, Max Meyer and Braxton Garrett -- are contenders to join the rotation at some point in 2021.

The Marlins were outscored by 41 runs during the regular season, suggesting they overachieved by finishing 31-29. Their productivity increased by more than half a run per game from 2019, but only four teams hit fewer homers, and their OPS ranked 23rd.

As with pitching, the Marlins expect prospects to help the offense continue to trend upward in 2021.

''We've got a number of guys who are going to have to take a step forward,'' Mattingly said. ''And there are other cats coming too. There is going to be a lot of competition for jobs.''