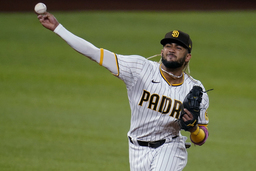 SAN DIEGO (AP) The euphoria of the San Diego Padres' first playoff series victory in 22 seasons quickly gave way to the pain of being swept out of the playoffs by their biggest rival, the Los Angeles Dodgers.

Spring training can't get here soon enough for the Padres, who finally shed their rebuilding label and rode the swagger and talent of budding superstar Fernando Tatis Jr. and Manny Machado to their first winning season since 2010 and reinvigorated a fan base that had been beaten down by so much losing.

''We know how to win now,'' said right fielder Wil Myers, their longest-tenured played who had a nice bounceback season at the plate. ''We're expecting to win. We've got great players in here. I know we came up short tonight, but there's a lot of optimism here in San Diego. It's going to be a great offseason for us. Ready to rock and roll and come back next year with a different mentality.''

Led by rookie manager Jayce Tingler, the Padres lost 12-3 Thursday night and were swept out of the NL Division Series by the Dodgers, who have dominated the NL West for nearly a decade. The Padres' explosive offense never showed up, and their pitching faltered in the absence of Dinelson Lamet and with just a brief appearance by Mike Clevinger.

An enduring image of the playoff ouster will be Tatis bent backward from his knees, staring skyward, after a costly throwing error.

Tatis is up to the challenge of helping the Padres get better in order to catch the Dodgers. ''Now this is going to be a fun ride,'' he said.

''El Nino'' has quickly captivated the long-suffering fan base with his smile and flair, diving plays at shortstop, fearless dashes around the basepaths and yes, his dance moves in the dugout after hitting home runs. He was a leading contender for NL MVP before slumping in the final two weeks of the regular season.

Raised in the game by his father, who played in the majors for 11 seasons, Tatis Jr. has made baseball fun again in San Diego. When he hit a grand slam on a 3-0 pitch with a seven-run lead at Texas on Aug. 20, he showed that he's here to play baseball, not follow antiquated ''unwritten rules.''

He hit two home runs and drove in five - and had a memorable bat flip - in an 11-9 victory against St. Louis that forced the decisive Game 3 in the wild-card round. He was robbed of a potential go-ahead homer by reigning NL MVP Cody Bellinger in a 6-5 loss in Game 2.

After a slow start, Machado, the $300 million man, helped carry the Padres through the final month and inserted himself into the MVP conversation. He was part of the ''Slam Diego'' record-setting run of four grand slams in as many games, along with Tatis, Myers and Eric Hosmer.

The Padres envisioned a deep playoff run behind Clevinger and Lamet, but got only one inning in the postseason out of Clevinger, the centerpiece of a blockbuster trade with Cleveland on Aug. 31. Both left their final regular-season starts with arm injuries and missed the wild-card series against St. Louis. Clevinger started Game 1 against the Dodgers but left after one inning. Lamet, who showed ace stuff, missed the entire postseason.

If healthy, Clevinger and Lamet will provide a powerful 1-2 punch at the front of the rotation. Fans are eager for the arrival of top prospect MacKenzie Gore, a left-hander, and to see if opening day starter Chris Paddack bounces back from an uneven season.

The injuries and lack of overall rotation depth forced the Padres into too many bullpen games. While nine relievers ably steered them through a 4-0 win to clinch the wild-card round, 11 pitchers on Thursday night did little more than set a postseason record for number of pitchers used in a game of any length.

The intriguing two-way prospect quickly blossomed into a leading NL Rookie of the Year contender when he ably filled in at first base when Eric Hosmer missed several games early in the season. When Hosmer came back, Cronenworth shifted to second base and continued to impress. He joined the ''Slam Diego'' crew when he extended the Padres' record run to five slams in six games. The Padres never planned to use the former Michigan closer on the mound during the pandemic-shortened season.