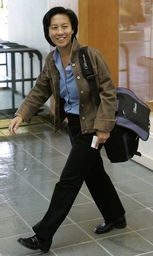 MIAMI (AP) The Miami Marlins' new general manager sat at home plate in the team's ballpark Monday, reflecting on all the times she struck out.

As baseball's first female GM, Kim Ng can bask in a breakthrough achievement that's all the more admirable because she was turned down for a similar job by at least five other teams over the past 15 years.

During an hour-long introductory virtual news conference, Ng confessed she had doubted whether the moment would ever come for her.

''Look, it's a tribute to the idea that you just have to keep plowing through,'' she said. ''That's what this is. It's like what we tell the players - you can mope and sulk for a few days, but that's it. You've got to come back, and that's what I've been able to do. I've been defeated and deflated numerous times, but you keep hoping.''

And now, Ng (pronounced Ang) has earned a win for women everywhere. She is believed to be the first female general manager in the four major North American professional sports leagues, and she's also being saluted as a pioneering Asian American, even overseas.

''Apparently I have small little fan club in China,'' she said.

Ng celebrated her achievement with her four sisters and her mother, who was born in China and came to the United States at age 5. Other ceiling-busting women offered congratulations, from Michelle Obama to Billie Jean King.

Ng said at least 500 people have told her they're now Marlins fans. She's especially heartened to set an example for young girls who might aspire to a career in sports management.

Ng, who turns 52 on Tuesday, started her baseball career as a Chicago White Sox intern in 1990, and for the past nine years was a senior vice president for Major League Baseball.

She spent four years with the New York Yankees when their star shortstop was Derek Jeter, now the Marlins' CEO. By reaching out to her regarding the Miami job, she said, Jeter showed fearlessness.

''Derek embodies that word,'' Ng said. ''I was privileged to watch Derek for four years every day on the field, and that was his approach to the game. He left it all out there every single day. Fearlessness on the field, and now with this, we see it off the field.''

Ng said her father introduced her to baseball, and she learned the game by playing stickball while in elementary school in Queens.

''First base would be the red car on the right,'' she said. ''Second base was the manhole. Third base was the green car on the left, and another manhole for home. Those are great memories.''

She attended her first game at Yankee Stadium in the late 1970s, and her favorite player was catcher Thurman Munson. She played shortstop for the University of Chicago's softball team, and then began to climb the major league ranks.

There was occasional resistance. In 2003, a New York Mets scout was firing for making racially insensitive remarks to Ng at baseball's GM meetings, when she was with the Los Angeles Dodgers. Some teams that gave her job interviews didn't really seem interested in hiring her, she said.

Even now, as she reaches the pinnacle in her profession, Ng said she feels as though a 10,000-pound weight has been transferred from one shoulder to the other.

As baseball's first female general manager, she embraces the chance to be judged on wins and losses.