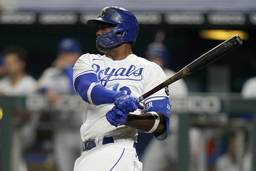 The Royals also cut third baseman Maikel Franco, failing to offer a contract to a player who would have been due a substantial salary increase after hitting .278 with eight homers and 38 RBIs while playing on a $2.95 million deal last season.

The only remaining arbitration-eligible players are two big ones: shortstop Adalberto Mondesi, their defensive linchpin and best all-around athlete, and No. 1 starter Brad Keller, who was 5-3 with a 2.47 ERA in nine starts last season.

Soler fits a crucial role in the Royals lineup by providing a big bat in an otherwise hit-and-run offense.

Dozier, who agreed to a $2.72 million deal plus incentives, is the other big bat in the lineup. The 29-year-old hit just .228 with six homers and 12 RBIs in 44 games last season, but the Royals believe his offense - and power - can bounce back to their previous levels. Dozier hit .278 with 26 homers and 84 RBIs during the 2019 season.

His defensive versatility is also important. Dozier can play both corner outfield spots along with first base and third base, and the likely departure of Franco means he could be headed to a more permanent role in the infield.

''He played a lot more infield the last two years than he has outfield, so we understand that,'' Royals general manager Dayton Moore said, ''but we're not going to close the door on his potential to play the outfield as well.''

Dozier was eligible for arbitration for the first time after earning $226,111 in prorated pay from a $610,500 salary.

Hahn, who allowed one earned run in 17 1/3 innings last season, will make $1.75 million with up to $350,000 in bonuses, and Junis will earn $1.7 million after making six starts and eight appearances while finishing with a 6.39 ERA last season.

Both of them have the ability to start or pitch out of the bullpen, the same kind of versatility that led the Royals to bring back right-hander Mike Minor on an $18 million, two-year deal earlier this week. Minor spent parts of four seasons in Kansas City before spending parts of the past three seasons with Texas and Oakland.

''Mike is committed to a big workload,'' Moore said. ''He threw over 200 innings in 2019 with 200 strikeouts, I believe. We just feel really good about how he blends in with the young starters we have on the horizon.''

Along with Franco, the Royals also non-tendered former first-round pick Bubba Starling, infielders Jeison Guzman and Erick Mejia, and pitchers Foster Griffin and Carlos Sanabria, both of whom were designated for assignment earlier this week.

Starling was the No. 5 overall pick in the 2011 amateur draft out of nearby Gardner-Edgerton High School, choosing to sign with the Royals rather than play quarterback at Nebraska. But despite flashing a solid glove, the hometown kid never developed the bat to match it. He hit just .169 with one homer and five RBIs while spending two stints on the injured list last season.

Mejia appeared in eight games after making the opening day roster for the first time last season, but he had just one hit in 14 at-bats. Guzman did not appear in a game after he was recalled from the alternate training site for three days in August.

The roster moves left the Royals with 36 players on their active roster, and Moore said this week that the Royals could be a bit more active than in years past trying to plug their remaining holes. They are still in search of an impact bat, particularly in the outfielder, where Dozier could be moving to the infield and Alex Gordon has faded into retirement.

''Look, opening day is several months away. ''You're constantly making adjustments to your roster,'' Moore said, ''not only throughout the offseason but also spring training, once the season begins. We're going to continue to stay open minded.''