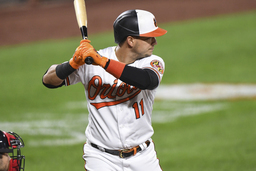 Baltimore Orioles shortstop Jose Iglesias (11) at bat during the fourth inning of a baseball game against the Atlanta Braves, Tuesday, Sept. 15, 2020, in Baltimore. (AP Photo/Terrance Williams)

The clubs announced the deal Wednesday.

Iglesias batted .373 with three homers and 17 RBIs in 39 games with the Orioles last season. He struggled with injuries, but posted the highest average in the majors among players with at least 100 plate appearances.

Baltimore exercised its $3.5 million option on Iglesias for 2021 last month. He is joining his fifth big league club after nine seasons spent with Boston, Detroit - where he made the All-Star team in 2015 - Cincinnati and Baltimore.

Iglesias' arrival all but confirms the departure of Angels shortstop Andrelton Simmons, who spent the past five seasons playing the position in Anaheim. Los Angeles also could move second baseman David Fletcher full-time to his original position at shortstop, although Iglesias has played only one career game at second base and 36 at third base, where the Angels have Anthony Rendon.

The Angels picked the 23-year-old Stallings in the fifth round of the 2019 draft. They also signed the 19-year-old Pinto as an international free agent in May 2019.

Iglesias is the Angels' second prominent pickup from Baltimore in two years. Last winter, Los Angeles swung a deal for right-hander Dylan Bundy, who went 6-3 with a 3.29 ERA in 11 mostly stellar starts for the Angels and finished ninth in the AL Cy Young Award voting.