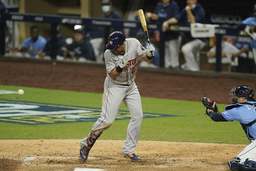 HOUSTON (AP) Outfielder Michael Brantley has agreed to a $32 million, two-year contract with the Houston Astros, a person familiar with the deal told The Associated Press.

The person spoke to the AP on condition of anonymity Wednesday because the contract, which is pending a successful physical, had not been announced.

Brantley spent the last two seasons in Houston after playing for Cleveland for his first 10 MLB seasons. Brantley hit .300 with five homers and 22 RBIs in 46 games in last year's pandemic-shortened season. He had three home runs and 11 RBIs in 13 playoff games last year as the Astros came a win shy of reaching the World Series for the second straight season.