Reds' Joey Votto wants to get back 'to being dangerous' 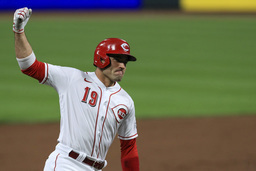 Cincinnati Reds' Joey Votto reacts as he runs the bases after hitting a solo home run in the third inning during a baseball game against the Pittsburgh Pirates in Cincinnati, in this Monday, Sept. 14, 2020, file photo. Votto is determined to be a power-hitter again. I want to get back to being dangerous, the 37-year-old first baseman said from Cincinnati Reds spring training complex in Goodyear, Arizona.(AP Photo/Aaron Doster, File)

Joey Votto is determined to be a power hitter again.

''I want to get back to being dangerous,'' Votto said Monday from the Cincinnati Reds' spring training complex in Goodyear, Arizona.

Besides, guys who crush the ball into the seats and punctuate it with a bat flip are just more fun to watch, the 37-year-old first baseman said. And he's still all about the fun.

Longevity in major league baseball is exceedingly difficult and sometimes requires reinvention. Votto said he tried too hard to be a different kind of hitter in order to be a tougher out as he reached his mid-30s, straying from what got him there in the first place.

''I lost some of my strengths that I first came to the league with - hitting the ball all over the field with power, being difficult to defend,'' Votto said. ''I did that in exchange for command of the strike zone, putting the ball in play, being a tough at-bat. And it zapped my power.''

He began making his way back to basics after a disastrous start to 2020.

The low point came 25 games into the season when he was benched due to performance for the first time in his career. At the time he was hitting .191 with three home runs and six RBIs.

Back in the lineup after three games, Votto made adjustments. He stood taller at the plate, swung away, tried to hit the ball harder and be OK with striking out more. Over the last 29 games he hit .258 with eight home runs, 14 RBIs and 21 runs. His resurgence coincided with a hot streak for the Reds, who got into the playoffs for the first time in seven seasons.

''I'm back to kind of a more comfortable place in terms of hitting,'' Votto said. ''Of course it's going to come with some more swings and misses and of course strikeouts, but as long as I'm productive and as long as I'm dangerous at the plate, it'll pay itself off. I have to remind myself that at the core, you know, that's who I am.''

The Reds will have some weapons around him. Third baseman Eugenio Suarez followed up a 49-homer, 103-RBI season in 2019 with 15 and 38, respectively, in last year's 60-game campaign. Nick Castellanos, Mike Moustakas and Shogo Akiyama - all added before the 2020 season - and others are capable of offensive pop.

But manager David Bell said Votto will stay put in the middle of the Reds batting order.

''He has experience hitting in the heart of the lineup for his whole career,'' Bell said. ''We'll have to take it as it comes but going into it we just anticipate him being a huge part of our lineup. Joey wants to play every day. He's less concerned with where he hits in the order, he just wants to be in there and contributing. That makes it easier, a guy with all the success he's had to have that attitude. It makes my job easier.''

''I feel healthy, I feel strong,'' he said. ''And I'm looking forward to taking some of the adjustments I made from last year and some of the good performance and carrying that - or more - into 2021.''