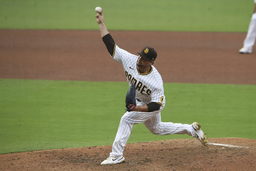 In this Sept. 13, 2020, file photo, San Diego Padres relief pitcher Trevor Rosenthal delivers against the San Francisco Giants in the seventh inning of a baseball game in San Diego. Experienced closer Rosenthal reached agreement on an $11 million, one-year contract with the Oakland Athletics, a person familiar with the negotiations told The Associated Press. The person spoke on condition of anonymity Thursday, Feb. 18, 2021, because the deal was subject to a successful physical. (AP Photo/Derrick Tuskan, File)

To clear a spot on the 40-man roster, the A's designated outfielder Dustin Fowler for assignment.