Pirates 2B Frazier focusing on the present, not the future 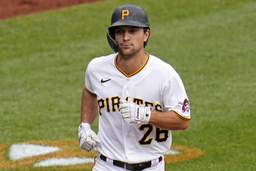 Pittsburgh Pirates' Adam Frazier trots home after hitting a solo home run off Chicago Cubs starting pitcher Alec Mills during the third inning of a baseball game in Pittsburgh, in this Thursday, Sept. 24, 2020, file photo. Frazier spent the offseason watching his good friends in the Pittsburgh Pirates clubhouse move on. While the second baseman is well aware he may be next, he's trying to focus on improving on a 2020 in which he was a Gold Glove finalist.(AP Photo/Gene J. Puskar, File)

Adam Frazier spent the winter watching the Pittsburgh teammates he came up through the minors with get flipped for prospects or flat-out released.

Josh Bell. Jameson Taillon. Trevor Williams. The Pirates parted ways with all of three and a handful of others during the offseason as part of a top-to-bottom organizational overhaul. Their exits left Frazier as the team's second-highest-paid player ($4.3 million) and conceivably its last major-league-ready trade chip.

While Frazier wasn't exactly sitting by the phone expecting general manager Ben Cherington or Derek Shelton to tell him he was headed elsewhere, it did cross his mind. More than once.

''I wouldn't say waiting, but I obviously read the internet so I see things like that,'' Frazier said Monday after the Pirates participated in their first full-squad workout in Bradenton, Florida. ''You never know what's going to come. I try to stay in conversation with Cherington and Shelton and try to expect what may be coming. None of that's really come about. If it happens, it happens.''

It didn't, at least in the run-up to spring training, meaning Frazier will likely start the season with the Pirates as the team's second-longest tenured player behind right fielder Gregory Polanco. A Gold Glove finalist in 2020, Frazier's defense was one of the few bright spots for a team that finished with the worst record in the majors during the abbreviated 60-game season (19-41).

''I know we have a lot to prove as a group,'' he said. ''All of us can play a lot better than we did last year. I think everybody knows that. Come in, try to get the camaraderie with the guys back and hit the ground running and have a good time.''

There wasn't too much good to go around last summer. Frazier struggled out of the gate and hit .230, nearly 50 points lower than his career average coming in. While his numbers trended upward in September (when he hit .258) it wasn't nearly good enough. And he knows it.

''I think it's no secret that I always come out kind of slow with the bat,'' he said. ''I'd like to fix that finally. Just be a consistent hitter. I know it's in me to do that.''

The Pirates need him to do that for multiple reasons. He may be their best candidate to bat leadoff and the more he plays, the more attractive he could potentially become, though Shelton swatted down the idea the team might rotate Frazier into the left field mix regularly to showcase his versatility and increase his value on the trade market.

Frazier will have competition after the Pirates signed veteran Wilmer Difo to a minor league deal in January. There's also plenty of uncertainty at shortstop, with Kevin Newman, Erik Gonzalez and Cole Tucker all in the discussion. Figuring out who likes the ball where when turning a double play will take time. It's what Frazier plans to focus on instead of wondering who will be signing his paycheck when September rolls around.

''I have to be where my feet are, and everything else that happens, happens,'' he said .''I'm happy to be here. Show up ready to work and build off of last season.''