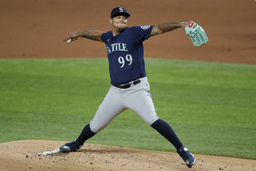 Seattle Mariners starting pitcher Taijuan Walker (99) throws to the Texas Rangers in the first inning of a baseball game in Arlington, Texas, in this Wednesday, Aug. 12, 2020, file photo. The Mets made a late addition to their starting rotation, agreeing to a $20 million, two-year contract with right-hander Taijuan Walker, a person familiar with the negotiations said. The person spoke to The Associated Press on condition of anonymity Friday, Feb. 19, 2021, because the agreement was subject to a successful physical.(AP Photo/Tony Gutierrez, File)

NEW YORK (AP) Taijuan Walker is guaranteed $23 million over three seasons in his contract with the New York Mets and would get $25.5 million if he pitches at least 175 innings in 2022.

Walker gets a $2 million signing bonus and salaries of $8 million this season and $7 million in 2022 as part of the deal announced Saturday.

He would receive a one-time assignment bonus if traded.

The 28-year-old Walker joins a rotation headed by two-time Cy Young Award winner Jacob deGrom. New York's need for a pitcher increased with the loss of Seth Lugo, who will miss the start of the season following elbow surgery Tuesday to remove a bone spur.

New owner Steven Cohen has displayed a willingness to spend, retaining Marcus Stroman with an $18.9 million qualifying offer and acquiring Carlos Carrasco from Cleveland in a trade along with All-Star shortstop Francisco Lindor for a rotation also projected to include David Peterson.

Walker has a five-pitch repertoire with a 93 mph fastball mixed among sliders, split-finger fastballs, sinkers and curveballs.

He was 4-3 with a 2.70 ERA over 11 starts during the pandemic-shortened season for Seattle and Toronto, which acquired him Aug. 27 for a player to be named, who became outfielder prospect Alberto Rodriguez.