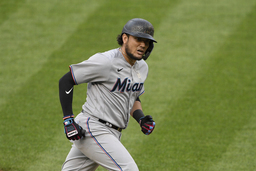 Miami Marlins' Miguel Rojas reacts as he rounds the bases on his three-run home run during a baseball game against the Washington Nationals in Washington, in this Friday, Aug. 21, 2020, file photo. Rojas has been with the Marlins since 2015, longer than any other player. He's a perfect fit for a small-budget team because he's an overachiever, and thus a sound investment. (AP Photo/Nick Wass, File) 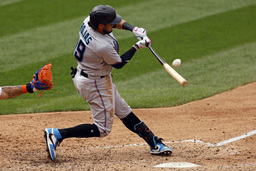 Miami Marlins' Miguel Rojas hits an RBI single during the sixth inning of a baseball game against the New York Mets in New York, in this Monday, Aug. 31, 2020, file photo. Rojas has been with the Marlins since 2015, longer than any other player. He's a perfect fit for a small-budget team because he's an overachiever, and thus a sound investment. (AP Photo/Adam Hunger, File)

MIAMI (AP) The Miami Marlins were about the take the field Tuesday for the initial full-squad workout of spring training, and manager Don Mattingly was eager to get his first look at a team trending upward and filled with players still growing into the job.

''I'm going to quit setting the bar on Miggy,'' Mattingly said. ''Every time you say that's as good as he can get, he gets better.''

Rojas has been with the Marlins since 2015, longer than any other player. He's a perfect fit for the small-budget franchise because he's an overachiever, and thus a sound investment.

He's also the undisputed clubhouse leader who knows there's still work to be done for a team that last year made a surprising run to its first postseason berth since 2003.

''We're getting picked again to be last in the division,'' Rojas said with a smile. ''That chip on the shoulder is still going to be there.''

That chip has long helped to drive Rojas, who broke into the majors with the Dodgers in 2014 but didn't become a full-time player until 2018 in Miami.

Rojas' glovework has always been excellent, and now he has a bat to match.

''I'm not surprised at all,'' he said following Tuesday's workout in Jupiter, Florida. ''I've been working so hard on becoming a complete player. That has always been my goal since I was little - I wanted to be an everyday shortstop. I needed to get better and stronger and learn from my mistakes.''

''You can't measure a guy's will to be better,'' Mattingly said. ''Most guys don't really reach their full potential. They settle short.''

Not Rojas. In 2020 he missed 16 games because of COVID-19 during the Marlins' early-season outbreak, but he returned to bat .304 with a .496 slugging percentage, both career highs.

His work ethic make him a natural leader on a young team, and the Venezuelan is an eager mentor to prospects. During the offseason he took under his wing Victor Mesa Jr., a Cuban defector and 19-year-old outfield prospect.

''Miggy has done a great job of growing into that role and trying to be vocal and connect with all the guys, whether they're American or Latin,'' third baseman Brian Anderson said. ''He's great at breaking down those boundaries.''

''Miguel is a really interesting guy, an interesting player,'' Ng said. ''He takes great pride in being a leader.''

Rojas' voice stood out after CEO Derek Jeter's group bought the team in late 2017. While other veteran players looked for the exit as the Marlins embarked on yet another rebuilding effort, Rojas became a vocal supporter of the plan.

The first payoff came last year with an unexpected playoff berth. And now that Jeter's group has transformed a bereft farm system into one of the baseball's best, Rojas sees more winning ahead.

''The depth in this organization is unbelievable,'' he said. ''All this young talent pushes me harder.''

Even though Rojas has a newborn daughter at home in Miami, he was so excited about spring training he showed up a week early. Once again, it was time to get better.