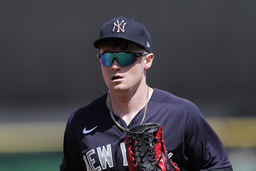 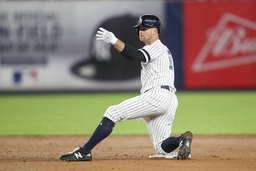 In this Sept. 19, 2019, file photo, New York Yankees' Brett Gardner gestures from second base after hitting an RBI double during the sixth inning of the teams' baseball game against the Los Angeles Angels in New York. Gardner is returning to the Yankees for a 14th season. The 37-year outfielder and New York agreed Friday to a $4 million, one-year contract, a person familiar with the negotiations told The Associated Press. (AP Photo/Mary Altaffer, File)

In Brett Gardner's mind, he's a starter, even though he knows the New York Yankees project him as Clint Frazier's backup in left field.

''I've always kind of gone into it with the mindset of having to fight for playing time, whether it was a young guy trying to beat out a guy like Melky Cabera or Johnny Damon, Nick Swisher, even guy like Bobby Abreu,'' the 37-year-old Gardner said Thursday at spring training.

Gardner, the longest-tenured Yankee, returned for a 14th season with a contract finalized Tuesday. He mentors the 26-year-old Frazier, who last year put behind a 2018 spring training concussion and vastly improved his defense.

''He's such a good teammate. He's such a jokester, like he's a little kid,'' Frazier said. ''I swear he's more immature than I am. He makes you feel comfortable, and he makes everyone around him better. There is still things that he can teach me as a player, teach me as a man moving forward.''

''I'm planning on playing every day,'' he said. ''And obviously that's not realistic. And I know that's not going to happen. But we've seen in the past guys getting hurt and things don't always go as planned.''

While 5-foot-11, he has power and often was the only left-handed hitter in the batting order last year, at times joined by switch-hitting Aaron Hicks. Gardner jokes with Aaron Judge about his pop.

Frazier, too, is in a mood to yuck it up after years of adversity. Acquired from Cleveland in the July 2016 deal for reliever Andrew Miller, he has overcome cockiness, a collision with an outfield wall at Bradenton in 2018 and defense that reached a low point against Boston in June 2019 when he misplayed balls off the bat of Eduardo Nunez, Andrew Benintendi and Michael Chavis.

''A lot of expectations there, I think some unfair expectations,'' Gardner said. ''And when you have a young kid, just drafted out of high school, you forget that he hasn't had a lot of time to develop necessarily in the minor leagues. And it's hard being away from home for the first time and things like that. So I think that coming over to the team, it just took him a minute to get comfortable and to be himself.''

Frazier was demoted to the alternate training site after the second game last season, on July 25. He returned Aug. 11 and came into his own.

''I didn't feel like I was looking over my shoulder the entire time wondering how many more days do I have until I have to take a black car down to Scranton,'' he said.

Frazier finished with a .267 average, eight homers and 26 RBIs in 131 at-bats. He joined Baltimore's Anthony Santander and Texas' Joey Gallo as finalists for AL Gold Glove in right field.

''I think he had to shed the narrative that was probably a little unfair about him because one he's always worked his tail off,'' manager Aaron Boone said. ''I think his confidence has really taken off. And this is the guy that hasn't had anything handed to him. He had to scratch and claw and fight and earn his position.''

Frazier enters 2021 with 24 homers and 82 RBIs in 162 career big league games, acutely aware his career matches a full season. As his bat heated up, his personality cooled.

''I learned to make it a little more of a mild version rather than a Tabasco hot sauce,'' he said. ''I'm still me behind the scenes, but I'm just trying to be a grown up and the best teammate that I can.''

Frazier credits Gardner with helping him through the tough times.

''There was obviously in 2019 a lot of discussions in the outfield where he was just trying to give any bit of advice he could on the mishaps that I was having in the outfield,'' he said. ''There was times when he pulled me over into his room just to put his arm around me and just to talk to me because he knew that I was going through some some tough times with some distractions that I caused. And Brett's just been a light that keeps shining really bright for me, and I'd selfishly like to have this guy around until he's like 50 just so I could finish my career with him.''

''If I could write a letter to myself back in the day and just leave it there, I would say, `I think you need to be yourself but you need to tone it down and just relax, shut up and just swing the bat,''' he said. '''And catch the balls - catch the fly balls.'''

Gardner is happy to be in pinstripes one more season to play, to prep and to prank.

''I'll obviously be 38 in August. So there's no guarantees,'' he said. ''We'll see how this season goes and take things not just one year at a time, but one day at a time. And there's no telling what the future holds. But I'll definitely try and soak all this in and enjoy it. And if this is it, then it's it. And if's I've got one more year in me, then then we'll do that, too.''