Boone discharged from hospital, day after getting pacemaker 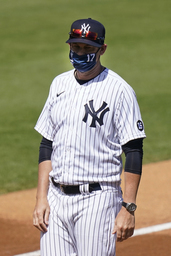 Boone is on a leave of absence from the Yankees and intends to return to work in a few days.

The 47-year-old is entering his fourth season as Yankees manager. He had open-heart surgery in 2009.

Bench coach Carlos Mendoza took over as acting manager for Wednesday night's 4-1 win over Toronto in Tampa and Thursday's 15-0 loss to Philadelphia in Clearwater.