Braves OF Inciarte looks to bounce back from miserable year 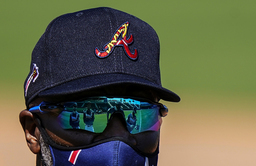 After the worst season of his career, Ender Inciarte is eager to show he's not washed up.

The Atlanta Braves outfielder batted just .190 in the pandemic-shortened year and was left off the roster for all three rounds of a postseason run that came up one win short of the World Series.

''I was really sad,'' Inciarte said. ''I'm not going to lie - it was one of the toughest moments I've had to deal with since I've been a professional baseball player.''

Even though top prospect Cristian Pache is tabbed as the center fielder of the future, Inciarte is getting a chance to win back his starting job this spring. He's still just 30 years old, but this is a key season heading into the final year of a five-year, $30.5 million contract that includes a team option for 2022.

''In my head, I'm always going to be a starting player,'' Inciarte said. ''I don't want to put in my head that I'm a backup player. Once you start thinking like that, you go one step back. I always try to think the best of me. I think I can do some great things still.''

Inciarte has done great things before. He made the All-Star Game in 2017, hitting .304 with 11 homers, 57 RBIs and 22 stolen bases while winning the second of three straight Gold Glove awards. But injuries limited him to 65 games in 2019, and he never got on track when the 2020 season finally started.

The left-handed Inciarte knew something was off from all the pitches he pulled weakly to the right side of the infield. In his better seasons, he was known for hitting low line drives the opposite way.

Most notably, his on-base percentage tumbled to a paltry .262 - by far the worst of his career, and not at all what the Braves were looking for out of a speedy player who had previously batted leadoff.

''I am supposed to be the table-setter for the guys behind me,'' Inciarte said. ''That's what got me out there every day. I'm just trying to do what I've done in the past. I know it's still there.''

With the Braves largely returning the same group that captured a third straight NL East title, center field is the only starting position up for grabs this spring.

Pache made a huge impression in last year's NL Championship Series, starting all but one game after Adam Duvall went down with an injury. The rookie had four RBIs and became only the seventh player in big league history to hit his first career homer in the playoffs.

Yet Pache is just 22, and he didn't get a chance to play at the Triple-A level with the minor leagues shut down last season. A bit more time in the minors might be good for his long-term development.

In the meantime, Inciarte has been gracious toward the youngster who's now trying to beat him out.

''Ever since my very first spring training, he's always been offering advice, willing to help me, willing to answer my questions,'' Pache said through a translator. ''It's been a great relationship. He's an awesome human being.''

Inciarte is equally impressed with Pache.

Inciarte still bears the scars of being left off the playoff roster, but he's got no bitterness toward the Braves.

He fully understands the decision they made.

''Obviously, I didn't have my best year,'' Inciarte said. ''When you're competing, you're trying to put the best team out there. You're trying to put players out there who can help you win the championship. You're not trying to make a player feel good or go back to being himself.''

Inciarte and the Braves hope he goes back to being himself in 2021.