A's third baseman Matt Chapman thrilled to be back on field 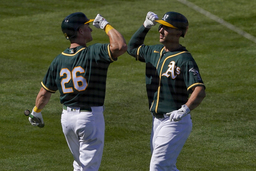 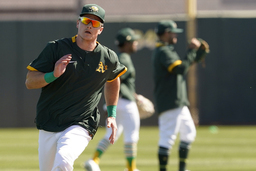 OAKLAND, Calif. (AP) Matt Chapman lunged to his right for a diving stop on a sharp grounder by Kurt Suzuki, leapt to his feet and fired a one-hopper to first in plenty of time for the out.

Chapman returned to his familiar spot at third base for the Oakland Athletics on Friday for the first time in nearly six months, and playing the hot corner again sure felt right for the two-time Platinum Glove winner.

The 27-year-old Chapman played in only 37 games during the pandemic-shortened 60-game 2020 season because of a right hip injury that required surgery in September.

So it's easy to understand why the slick fielder felt so happy - not to mention reassured - getting back out there and doing his thing with confidence in the A's 7-3 loss to the AL West rival Angels in Mesa, Arizona.

''My hip didn't bother me,'' he said. ''Going to make that play, I didn't really think about anything, just make that play, got up, made the throw. It's nice to kind of test it, see where it's at.''

Chapman had 10 homers and 25 RBIs while batting .232 before the injury. He missed Oakland's third straight playoff berth that ended with a loss by the AL West champions to the rival Houston Astros in a four-game Division Series.

Of that terrific play in the top of the second inning Friday, starting pitcher James Kaprielian said, ''Stuff like that gives me the chills.''

It certainly showed Chapman he is back and ready to go - and planning for a healthy, full season this time.

''For me, the most reassuring thing is to just go out there and make a diving play like that and pop up and make the play and nothing hurt,'' he said. ''It just felt like it was routine and normal and able to go make those plays and not have any sort of pain. So it gives me confidence and it's reassuring going forward that I'm going to be able to make those plays and not have anything lingering.''