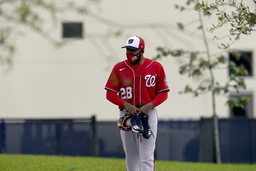 WEST PALM BEACH, Fla. (AP) Jeremy Jeffress was released by the Washington Nationals on Sunday for what general manager Mike Rizzo called unspecified ''personnel reasons,'' less than two weeks after the reliever agreed to terms on a minor league deal.

The team sent out a six-word tweet announcing the move.

Rizzo released a statement about the right-hander via a team spokesman that did not offer an explanation, saying only: ''He was released for personnel reasons.''

The Washington Post first reported that the Nationals were parting ways with Jeffress, who was expected to add to a back end of a Nationals bullpen that already included Brad Hand, Daniel Hudson, Will Harris and Tanner Rainey.

The 33-year-old Jeffress was taken by Milwaukee in the first round pick of the 2006 amateur draft and has pitched for five teams over 11 years in the majors. He was an NL All-Star in 2018 for the Brewers.

Last season, Jeffress went 4-1 with a 1.54 ERA and eight saves in 10 chances for the Chicago Cubs.

More than a decade ago, Jeffress was suspended twice for violating the minor league drug treatment and prevention program. He has said he used marijuana to manage a severe case of anxiety and he was diagnosed with juvenile epilepsy in 2013.