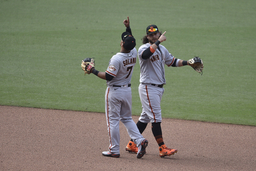 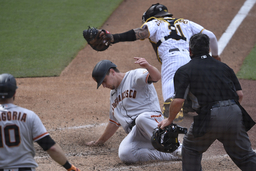 San Francisco Giants' Alex Dickerson slides into home ahead of the tag by San Diego Padres catcher Luis Campusano for the go-ahead score during the 10th inning of a baseball game in San Diego, Wednesday, April 7, 2021. The Giants won 3-2. (AP Photo/Kelvin Kuo) 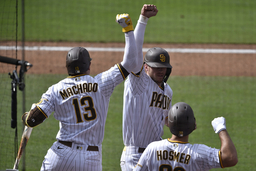 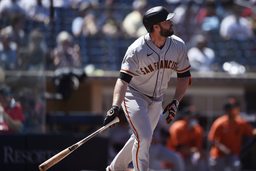 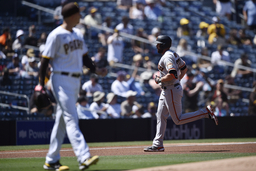 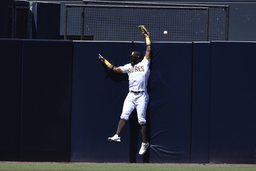 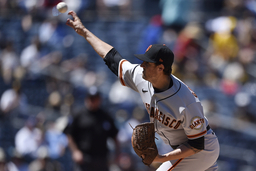 SAN DIEGO (AP) Alex Dickerson scored on Donovan Solano's sacrifice fly in the top of the 10th inning and the San Francisco Giants beat the San Diego Padres 3-2 Wednesday behind an odd home run by Darin Ruf and seven strong innings from Gausman.

Dickerson, who grew up in suburban Poway, started the 10th on second base and advanced when Mike Yastrzemski beat out a nubber down the first base line for an infield single. Reliever Tim Hill (0-1) let the ball roll, thinking it would go foul. Solano followed with a flyball to right to bring in Dickerson.

San Diego's Jurickson Profar reached third in the 10th on Kim Ha-seong's grounder before Wandy Peralta struck out Jorge Mateo and got rookie Tucupita Marcano to fly out to end it for his first career save. Jake McGee (1-0) pitched a perfect ninth for the win.

San Diego's Wil Myers tied the game at 2 with a homer in the eighth off Tyler Rogers.

The Giants had led since the second inning, when Ruf's flyball with one out off Blake Snell went off Mateo's glove and over the center-field fence for a two-run homer. Mateo tried to make a leaping catch against the fence but the ball bounced off the heel of his glove and went over for Ruf's second homer of the series. Evan Longoria was aboard on a leadoff double.

''It looked like it hit off the bottom of his glove,'' Ruf said. ''When you play outfield and are kind of in between jumping toward the wall of jumping off of two feet, it looks like he kind of got caught in between. It's a tough play and luckily it went our way.''

Ruf homered on an 0-1 fastball. ''After the first fastball my eyes were kind of looking for that and luckily he threw it again, kind of middle in, middle up and I was able to pull my hands inside and get my barrel to it.,'' he said.

Gausman was brilliant for a second straight start but once again didn't factor in the decision. He held the Padres to one run and four hits in seven innings, struck out five and walked one.

The Padres didn't get to Gausman until the fifth inning, when Mateo hit an RBI single. San Diego had runners on first and second with two outs in the sixth before Gausman struck out rookie Luis Campusano.

''You know the runs are going to be at a premium,'' Gausman said. ''I thought we both threw the ball pretty well today. It's always fun going up against a guy that has incredible stuff. Anytime you face a guy who's won a Cy Young, you want to beat him, obviously, and you definitely kind of elevate your game a little more.''

Gausman was coming off an excellent start at Seattle on opening day, when he allowed only one run while pitching into the seventh. He didn't factor into the decision after the Mariners rallied in the 10th for an 8-7 win.

Snell, obtained in a trade with Tampa Bay on Dec. 29, also got his first big league hit, a single off Gausman in the third.

Giants: Are off Thursday and will play their home opener Friday against the Colorado Rockies.

Padres: RHP Joe Musgrove (1-0, 0.00) is scheduled to start Friday night in the opener of a three-game series at Texas. The Rangers are expected to counter with RHP Kohei Arihara (0-0, 5.40).