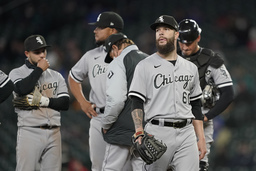 Chicago White Sox starting pitcher Dallas Keuchel, right, walks off the mound after being pulled during the sixth inning of a baseball game against the Seattle Mariners, Wednesday, April 7, 2021, in Seattle. (AP Photo/Ted S. Warren) 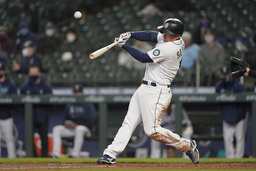 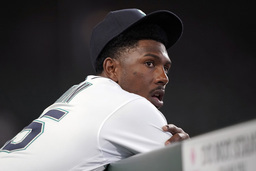 Seattle Mariners starting pitcher Justin Dunn leans on the dugout rail after he was pulled from a baseball game against the Chicago White Sox during the fifth inning, Wednesday, April 7, 2021, in Seattle. (AP Photo/Ted S. Warren) 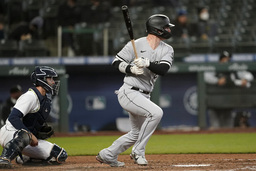 Chicago White Sox's Zack Collins follows through after hitting a two-RBI single that scored Adam Eaton and Jake Lamb during the fifth inning of a baseball game against the Seattle Mariners, Wednesday, April 7, 2021, in Seattle. (AP Photo/Ted S. Warren) 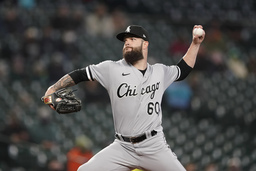 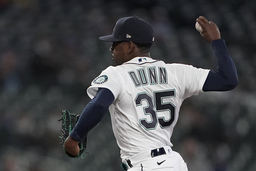 SEATTLE (AP) Kyle Seager became the beneficiary of Ty France's ability to be a pest at the plate.

Seager slapped an opposite-field, bases-clearing double for the big blow in Seattle's seven-run sixth inning, and the Mariners avoided a sweep with an 8-4 win over the Chicago White Sox on Wednesday.

Seager had three hits, and his two-out liner down the left-field line cleared the bases as the Mariners posted their highest-scoring inning of the young season. But Seager got his chance at hitting in the inning because France refused to relent.

''That was an incredible at-bat. He worked him like crazy,'' Seager said.

France fell behind 0-2, fouled off four two-strike pitches and walked on the 11th pitch of the at-bat from Chicago's Matt Foster to keep the inning alive for Seager.

''It's pretty awesome to watch. He did not back down. He was not going to give in,'' Seattle manager Scott Servais said. ''He kept fighting, fighting, fighting and ended up with the walk, and kind of opened the flood gates after that.''

Taylor Trammell, J.P. Crawford and Jose Marmolejos all had RBI singles in the inning, and Mitch Haniger added a sacrifice fly.

Almost all of that damage came off Foster who took over after Dallas Keuchel allowed the first two batters of the inning to reach. Foster (0-1) recorded just two outs, and allowed five hits and five earned runs before getting lifted.

Chicago manager Tony La Russa said he mismanaged the inning and left Foster in for too long.

''That's probably the clearest example why I'm upset with myself, (Foster) faced too many hitters,'' La Russa said.

Keuchel allowed three runs, struck out three and walked three in his second start of the season.

Seattle starter Justin Dunn allowed only one hit, but couldn't finish the fifth inning due to control problems. Dunn walked eight in 4 2/3 innings, including a bases loaded walk to Yasmani Grandal that ended his day. Andrew Vaughn greeted Will Vest (1-0) with a two-run single, and Danny Mendick added an RBI single an inning later.

But that was all the White Sox could manage. Chicago failed to score after loading the bases with no outs in the seventh as Luis Robert lined into a double play that ended the threat.

''We were in a really good position going into the sixth inning and the best way to explain the sixth, I mean I did a really lousy job of managing that inning,'' La Russa said.

Dunn's eight walks were the most by a Seattle starting pitcher since Travis Blackley walked nine vs. Oakland in July 2004. The franchise record by a starter is 11 by Rick Jones in Seattle's expansion season of 1977. Hall of Famer Randy Johnson walked 10 twice during his time with the Mariners.

Seattle pitchers walked 10 batters total. Dunn said he felt comfortable throwing out of the wind-up but had issues pitching out of the stretch.

''Probably put a little too much emphasis on controlling the running game and not executing pitches and to started to get a little too fine,'' Dunn said.

White Sox: LF Billy Hamilton was replaced in the fifth inning due to tightness in his left hamstring after stealing third base. ... Chicago placed SS Tim Anderson on the 10-day injured list but are hopeful he'll be able to return from his hamstring injury early next week. Manager Tony La Russa held out hope Anderson would be available for Thursday's home opener but the team decided to be safe and hold him out longer. Anderson will be eligible to come off the injured list April 15.

Mariners: 1B Evan White was lifted in the fifth inning due to tightness in his left quadriceps and is unlikely to play on Thursday against Minnesota. White appeared to be bothered by the leg while running out a ground ball in the bottom of the third inning that led to Seattle's first run. White was replaced by Marmolejos. The Mariners are likely to re-evaluate whether White needs to go on the injured list after Thursday's game.

White Sox: RHP Lance Lynn (0-0) will make his second start as the White Sox return home to face the Royals. Lynn allowed two unearned runs in 4 2/3 innings in his first start against the Angels.

Mariners: LHP Marco Gonzales (0-0) looks to rebound after a shaky first outing on opening day as Seattle goes on the road for the first time beginning in Minnesota. Gonzales gave up five earned runs in six innings against San Francisco.