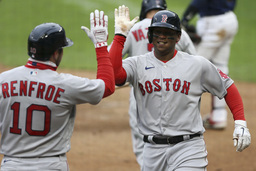 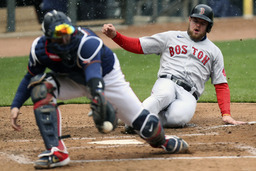 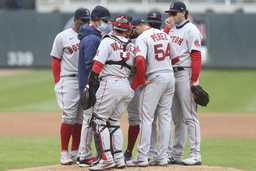 Boston Red Sox players meety at the mound during the first inning of a baseball game against the Minnesota Twins, Tuesday, April 13, 2021, in Minneapolis. (AP Photo/Stacy Bengs) 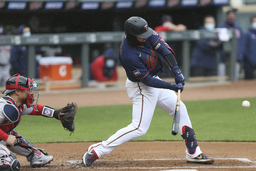 Minnesota Twins' Mitch Garver (8) swings at the ball during the first inning of a baseball game against the Boston Red Sox, Tuesday, April 13, 2021, in Minneapolis. (AP Photo/Stacy Bengs) 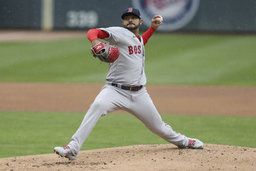 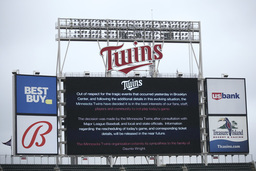 MINNEAPOLIS (AP) Rafael Devers homered for the fourth straight game and the streaking Boston Red Sox beat the Minnesota Twins 4-2 on a snowy Tuesday afternoon in a series opener moved back following the fatal police shooting of a Black man in a nearby suburb.

Hunter Renfroe hit a solo homer and Bobby Dalbec added a pair of RBI doubles as Boston won its seventh in a row after losing its first three games of the season.

''I felt good today. I felt good in my early work the last two days, even though we didn't play yesterday,'' Dalbec said. ''Obviously, it's pretty cold and tough to get the hands going. But you kind of got to just push through it and find a way to stay warm.''

Monday's game was postponed due to safety and sensitivity concerns in the Twin Cities after the police shooting a day earlier of Daunte Wright during a traffic stop. The Twins held a moment of silence for Wright prior to Tuesday's game.

Snow flurries fell for most of the game and it was 33 degrees for the first pitch. That made for the third-coldest start at Target Field, the record being 27 degrees on April 7, 2018.

''It was cold. I don't feel my fingers the first inning,'' said Boston starter Martin Perez, who allowed the first two hitters of the game to score before settling in for five innings.

Adam Ottavino (1-0) earned the win with a scoreless inning of relief. Matt Barnes pitched a perfect ninth for his first save of the season.

Randy Dobnak (0-2) took the loss for Minnesota, which has lost three in a row.

''I think that this is one of those periods of time that I think a lot of teams go through when you're looking for a big hit,'' Twins manager Rocco Baldelli said. ''You're looking for something to set everything off and get things rolling in some of these games.''

''We had really good at-bats to start this game. We had a ton of guys on base. We pushed a couple of runs across. We need to find ways to do that as the game goes on, as the relievers find their way into these games,'' he said.

Christian Arroyo led off the eighth against Dobnak with a double and scored on Dalbec's second double of the game to right field to break a 2-all tie. Arroyo had two hits and scored on both of Dalbec's doubles.

''That's what makes us a good team,'' Red Sox manager Alex Cora said of getting production from the last two batters in the lineup, Arroyo and Dalbec. ''I do believe on a daily basis, regardless of who plays, we're going to be competitive offensively and we're going to be good defensively.''

Monday's postponement will be made up as part of a traditional doubleheader on Wednesday. The first game will start at its regularly scheduled time of 1:10 p.m.

The first three batters for Minnesota reached base against Perez. Byron Buxton hit the first pitch of the bottom of the inning down the left-field line for a double as his bat broke. After a hit by pitch and walk, Jorge Polanco scored Buxton with a sacrifice fly and another run scored on Luis Arraez's grounder.

Perez took off his long sleeve shirt between innings because he said he felt tight. He didn't allow another run and got the Twins to strand seven baserunners in his five innings.

J.A. Happ started for the Twins and cruised through the first four innings, allowing just two baserunners. His day ended early as Renfroe hit his first homer of the season with two outs in the fifth, snapping a string of 11 straight hitters retired by Happ.

''It was pretty windy and coming down sideways a little bit pregame,'' Happ said of the weather. ''Then the wind and the cold makes it tough to grip the ball. You're battling that a little bit but maybe not as bad as it looked overall.''

Twins: Nelson Cruz was scratched from the lineup before the game with a non-COVID-19-related illness. Baldelli said Cruz went home to rest instead of staying at the ballpark. ... Baldelli said 3B Josh Donaldson, who's been out since the season's first game with a right hamstring strain, is likely to be activated from the injured list for Wednesday's doubleheader.