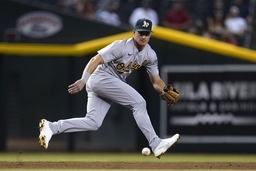 Oakland Athletics third baseman Matt Chapman chases down a grounder hit by Arizona Diamondbacks' Tim Locastro before throwing to second base for a force out during the second inning of a baseball game Tuesday, April 13, 2021, in Phoenix. (AP Photo/Ross D. Franklin) 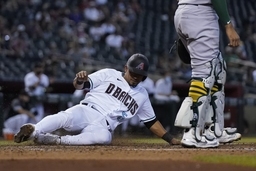 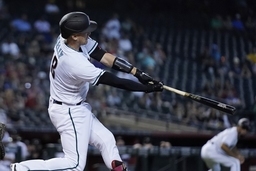 Arizona Diamondbacks' Carson Kelly connects for a three-run home run against the Oakland Athletics during the second inning of a baseball game Tuesday, April 13, 2021, in Phoenix. (AP Photo/Ross D. Franklin) 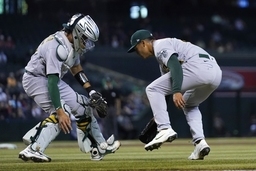 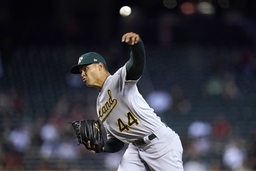 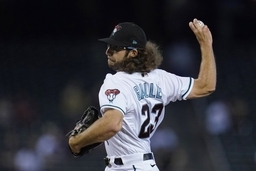 PHOENIX (AP) The Oakland Athletics were stagnant, the strikeouts piling up, the hits scattered.

Once the seventh inning rolled around, they snapped out of it it, turning what appeared to be heading toward a disappointing loss into a fourth straight win.

Jed Lowrie hit a tying, three-run homer in the seventh, Seth Brown had a solo shot in the next frame and the A's rallied from a five-run deficit to beat the Arizona Diamondbacks 7-5 on Tuesday.

''This is a dangerous team,'' said Brown, who hit his first big league homer on Saturday.

The Diamondbacks appeared to be cruising to their third win in four games.

Carson Kelly hit a three-run homer in the second inning and Arizona scored two more in the third. Zac Gallen struck out eight in his season debut and gave up one run in four innings, on Stephen Piscotty's solo homer.

Arizona's bullpen was sharp before unraveling in the seventh inning.

Mark Canha made it 5-2 win an RBI single and Lowrie, who had three RBIs in Monday's 9-5 win, followed with a three-run homer off Kevin Ginkel.

Brown led off the eighth with his homer off Anthony Swarzak (0-1) and Matt Chapman's run-scoring triple off the wall in the ninth made it 7-5.

Yusmeiro Petit (3-0) got the final out in the seventh inning and Lou Trivino worked around a walk in the ninth for his first save since 2018.

Oakland has won five of six since starting the season 0-6.

''We had a couple hiccups late in the game out of the bullpen. That happens,'' Diamondbacks manager Torey Lovullo said. ''We've just got to grind through it, digest it, learn from it and keep moving on.''

Gallen was Arizona's best pitcher last season, finishing with a 2.75 ERA and 82 strikeouts in 72 innings. The right-hander opened the 2021 season on the injured list after suffering a hairline right forearm fracture during batting practice in spring training.

Arizona optioned right-hander Matt Peacock to the alternate training site to make room for Gallen on the roster and Riley Smith was moved to the bullpen to clear a spot in the rotation.

Gallen escaped a first-and-third jam with one out in the first inning and worked through more traffic until Piscotty hit his first pitch of the fourth out to left. He allowed a run on three hits in four innings.

''Some of the stuff wasn't as sharp as I wanted to be, the curveball, but I think that will come in time,'' Gallen said. ''That's probably the most rusty since I haven't thrown it in two weeks.''

Oakland starter Jesus Luzardo had a tough day on the mound and at the plate.

The right-hander allowed five runs on six hit in 2 2/3 innings and needed a bit refresher from manager Bob Melvin before hitting for the first time since he was 18.

''BoMel was just telling me what to do,'' Luzardo said. ''If the guy got on, I was going to have to bunt. Basically that was it -- where to stand, I was asking him where to stand, where the on-deck circle was.''

Luzardo didn't have to bunt and actually put the ball into play, hitting into a fielder's choice in the second inning.

Oakland fans must have done a double take when Sergio Romo took the mound in the eighth inning.

The right-hander reliever known for his bushy beard was clean shaven for Tuesday's game and the change seemed to have done him some good.

Romo worked a perfect inning, bridging the gap for Trivino to finish off the game.

Athletics: DH/1B Mitch Moreland (hamstring) missed his fourth consecutive game. ... 1B Matt Olson was out of the lineup after being hit on the left thumb by a pitch in the seventh inning Monday night.

Diamondbacks: Lovullo said he will use a rotation of Asdrubal Cabrera, Wyatt Mathisen and Pavin Smith at first base with Christian Walker (oblique) on the injured list. Mathisen started Tuesday's game and went 0 for 3.