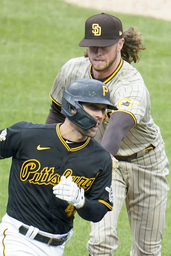 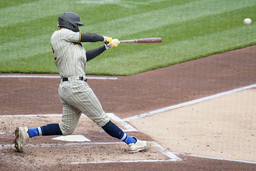 San Diego Padres' Eric Hosmer drives in two runs with a bases loaded single against the Pittsburgh Pirates in the second inning of a baseball game, Thursday, April 15, 2021, in Pittsburgh. (AP Photo/Keith Srakocic) 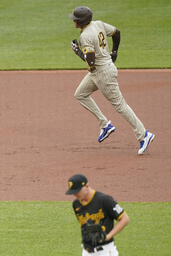 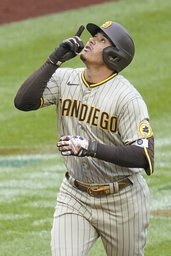 San Diego Padres' Manny Machado points skyward as he heads home after hitting a home run against the Pittsburgh Pirates in the first inning of a baseball game, Thursday, April 15, 2021, in Pittsburgh. (AP Photo/Keith Srakocic) 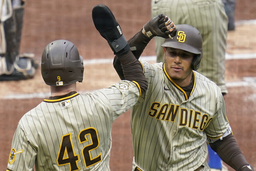 San Diego Padres' Manny Machado, right, is greeted by a teammate after hitting a two-run home run against the Pittsburgh Pirates during the first inning of a baseball game, Thursday, April 15, 2021, in Pittsburgh. (AP Photo/Keith Srakocic) 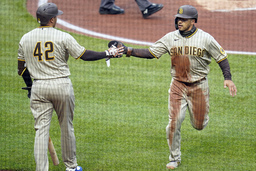 San Diego Padres' Trent Grisham, right, is greeted by an on-deck batter after scoring on a double by Jake Cronenworth in the first inning of a baseball game against the Pittsburgh Pirates, Thursday, April 15, 2021, in Pittsburgh. (AP Photo/Keith Srakocic) 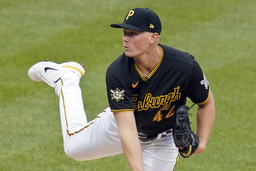 Pittsburgh Pirates starting pitcher Mitch Keller follows through with a pitch against the San Diego Padres during the first inning of a baseball game, Thursday, April 15, 2021, in Pittsburgh. (AP Photo/Keith Srakocic)

PITTSBURGH (AP) The San Diego Padres needed a boost with a showdown against the Los Angeles Dodgers looming.

Manny Machado and Eric Hosmer didn't wait to provide one.

Machado hit his third home run of the season during a four-run first and Hosmer added a two-run single in the second as the Padres jumped on the Pittsburgh Pirates early in an 8-3 win on Thursday.

The early outburst against Mitch Keller (1-2) helped San Diego earn a split of the four-game series against the Pirates and finish 5-2 during an eastern swing through Texas and PNC Park.

''We felt like a day like this was coming,'' said Hosmer, one of four Padres with two hits as San Diego bounced back from consecutive losses to the rebuilding Pirates.

The victory set the stage for San Diego's first meeting of the season with the reigning World Series champions, who visit Petco Park for a three-game series starting Friday.

The two met in the NL Division Series last fall, a 3-0 sweep by Los Angeles on its way to the franchise's first championship in 32 years. Nearly every move San Diego made during the offseason was designed to close the gap on the Dodgers in the NL West. This weekend offers a glimpse of how much progress the Padres have made.

''I think it's a little different heading in,'' Hosmer said. ''Obviously having a little bit of history with them in the postseason last year, maybe that'll spice things up a little bit.''

Chris Paddack (1-1) labored at times but managed to get through five innings and give San Diego's overtaxed bullpen some semblance of a normal workload after being forced to cover a combined 11 innings in losses Tuesday and Wednesday. Craig Stammen worked three innings to pick up just the sixth save of his 12-year big league career and first since 2019.

''We were hoping to at least get through two,'' San Diego manager Jayce Tingler said of Stammen's innings. ''For him to be able to finish that game up for us, that was huge.''

Keller dazzled in his previous start against Chicago but returned to the erratic form that's dogged him most of the spring. Machado punished a 90 mph curveball over the heart of the plate to make it 3-0 four batters in and Keller never really recovered. The 25-year-old, considered to be part of the nucleus the Pirates are attempting to build around, eventually exited after 3 1/3 innings, giving up seven runs and nine hits with three walks and just one strikeout as his ERA rose to 8.74.

''We wanted him to attack the zone, and he was in the zone,'' Pirates manager Derek Shelton said of Keller. ''But the fact that the sharpness of the breaking ball wasn't there against a good hitting team and they took advantage of it.''

Pittsburgh tested Paddack in the fifth when Tucupita Marcano - filling in right field for an injured Wil Myers - couldn't come up with Bryan Reynolds' sinking line drive, allowing two unearned runs to score. Colin Moran followed with a single but Paddack induced Erik Gonzalez into a fielder's choice to end the threat.

Paddack admitted he thought Tingler was coming out to get him when Tingler made a mound visit after the error before realizing the manager was just giving the 25-year-old a chance to regroup.

San Diego's bullpen - which hadn't allowed more than two runs in any game this season before surrendering four each on both Tuesday and Wednesday - returned to form thanks in large part to the 37-year-old Stammen.

Pirates: 3B Ke'Bryan Hayes (left wrist discomfort) is swinging a bat but has yet to face live pitching. General manager Ben Cherington said Thursday there's no firm timeline for when Hayes - who is eligible to come off the injured list - will be back but reiterated there are no long-term concerns.

Padres: LHP Ryan Weathers (1-0, 1.50 ERA) will make his first major league start on Friday. The 2018 first-round pick pitched 1 1/3 innings in his major league debut last fall against the Dodgers in Game 1 of the NL Division Series.

Pirates: Begin a nine-game trip on Friday in Milwaukee. JT Brubaker (1-0, 1.93) starts in the series opener. Brubaker allowed one run in 5 1/3 innings last Sunday against Chicago to pick up his first win of the season.