Tue May 4 2:07am ET
By GREG BEACHAM
AP Sports Writer 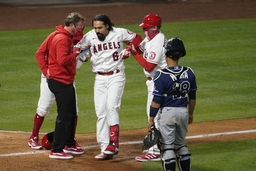 Los Angeles Angels' Anthony Rendon (6) is helped up after hitting a foul ball off his leg during the eighth inning of a baseball game against the Tampa Bay Rays Monday, May 3, 2021, in Anaheim, Calif. (AP Photo/Marcio Jose Sanchez) 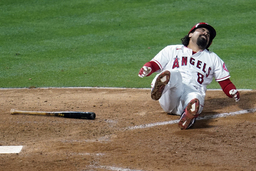 Los Angeles Angels' Anthony Rendon falls down after hitting a foul ball off his leg during the eighth inning of a baseball game against the Tampa Bay Rays Monday, May 3, 2021, in Anaheim, Calif. (AP Photo/Marcio Jose Sanchez) 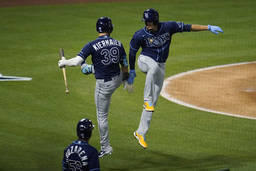 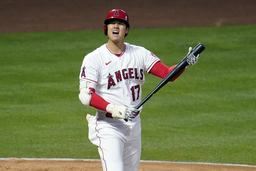 Los Angeles Angels' Shohei Ohtani reacts as he hits a foul ball during the third inning of a baseball game against the Tampa Bay Rays Monday, May 3, 2021, in Anaheim, Calif. (AP Photo/Marcio Jose Sanchez) 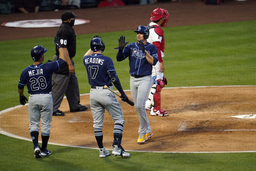 Tampa Bay Rays' Willy Adames, center right, is high-fived by Austin Meadows (17) after Adames scored on a single by Mike Brosseau during the third inning of a baseball game against the Los Angeles Angels Monday, May 3, 2021, in Anaheim, Calif. (AP Photo/Marcio Jose Sanchez)

ANAHEIM, Calif. (AP) Tyler Glasnow was fairly confident the Tampa Bay Rays hadn't all forgotten how to hit just one month into the new season after winning the AL pennant last fall.

The Rays are finally getting it together at the plate, and their ace got the benefit.

Willy Adames and Manuel Margot homered, Mike Brosseau had a two-run single and the Rays opened a seven-game California road trip with a 7-3 victory over the Los Angeles Angels on Monday night.

Glasnow (4-1) pitched six innings of four-hit ball with three walks for the Rays. With 18 family members and friends in the stands at Angel Stadium, the Los Angeles-area native largely dominated the Halos' lineup until a rocky sixth, striking out eight for his fourth win in five starts.

Tampa Bay is still batting only .224 with a minuscule .371 slugging percentage and middle-of-the-pack stats in most other offensive categories, but Glasnow isn't worried after the Rays backed him with their highest-scoring performance in nearly two weeks.

''We're still the same team as last year,'' he said. ''They're all really good hitters. Just sometimes in baseball with a six-month season, pitching won't work, hitting won't work. But we all look really good, and I'm happy with where the team is right now. Hopefully we'll keep on hitting.''

Shohei Ohtani hit his ninth homer after being scratched from his scheduled pitching start earlier in the day for the Angels, who have lost eight of 12.

Anthony Rendon also homered in the sixth, but the slugging third baseman exited in the eighth after sharply fouling a ball off his left knee. Rendon, who has already missed 12 games this season due to injuries, had to be helped off the field.

X-rays on Rendon's knee were negative, and he is day-to-day with a bruise.

Jose Quintana (0-3) yielded five runs and six hits with nine strikeouts for the Angels while failing to get out of the fourth inning in another poor start. The veteran has lasted just 17 combined innings in five starts for his new team, giving up 20 earned runs.

''Bad luck is the only luck this guy has got,'' Angels manager Joe Maddon said of Quintana. ''The numbers weren't good, but then again, he strikes out nine in 3 2/3 innings. How does that happen? I don't know what to say. I know it's probably difficult to defend and people are not going to understand, but from where I was sitting, he threw the ball well.''

Ohtani was scratched from his fourth mound start of the season several hours before the game because he was still a bit sore after getting hit on the right elbow by a pitch Sunday in Seattle.

But the two-way star went 2 for 4 as the Angels' designated hitter, delivering a double and a 427-foot, two-run shot over the ficus trees behind the center-field fence.

Quintana struck out five of Tampa Bay's first six hitters, but the Rays loaded the bases in the third before Brosseau's single off David Fletcher's glove at shortstop. Yandy Diaz and Margot followed with RBI singles to interrupt the Rays' recent struggles with runners in scoring position.

Adames crushed his third homer of the season in the fourth, a 446-foot shot to left-center. Margot added a two-run homer in the ninth.

Rendon followed Ohtani's homer with a drive into the Angels' bullpen in left, but Glasnow salvaged Tampa Bay's two-run lead by inducing a double play with his 99th and final pitch.

''It's huge having starters that are capable and consistently get deep in the game like Glas has done,'' Rays manager Kevin Cash said. ''If you shave one inning or prevent one (reliever) from pitching, that goes a long way over a month and a season. It's impressive. The strikeouts are there, but he's doing it pretty quickly, and it allows him to get deep in ballgames.''

Rendon's injury forced 41-year-old first baseman Albert Pujols to play third base in the ninth inning. The fifth-leading home run hitter in major league history regularly played third early in his career with St. Louis, but has manned the hot corner in only a handful of games over the past 18 years.

Angels: Ohtani was too sore to pitch, but he will play catch Tuesday and return to the mound later in the week, with Maddon saying there's an ''outside chance'' of Wednesday. Los Angeles has a six-man rotation, so pitchers will move up one day until Ohtani is ready. ... Angels reliever Mike Mayers went on the injured list with an unspecified ailment, and the club recalled LHP Patrick Sandoval.

Promising prospect Shane McClanahan (0-0, 4.50 ERA) makes his second career start for Tampa Bay, and the Angels are likely to counter with Alex Cobb (1-1, 7.16).