Mets scratch deGrom because of tightness in right side 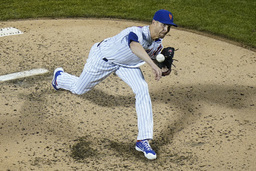 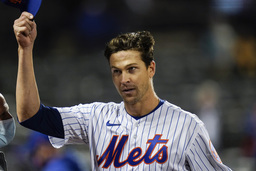 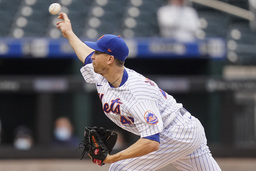 ST. LOUIS (AP) New York Mets ace Jacob deGrom was scratched from Tuesday night's start against St. Louis because he was having trouble getting loose as he started to stretch ahead of his outing.

''He let us know earlier today that he had some tightness on his right side,'' Mets manager Luis Rojas said about three hours before game time.

''I saw him before coming to the field and he was stretching, trying to feel his right side a little bit, and that's when we started discussing whether he's going to start or not. And then we got to the point where he's not, and he's getting further tests right now and then we're waiting to see some results,'' h said.

Rojas said the issue was not evident before Tuesday.

DeGrom, a two-time NL Cy Young Award winner, had been baseball's most dominant pitcher this season, with a major league-best 0.51 ERA in five starts, 59 strikeouts in 35 innings with just four walks. Still, he is just 2-2.

Miguel Castro was to start in deGrom's place.