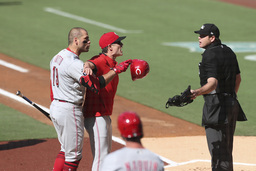 Cincinnati Reds' Joey Votto (19) is held back by manager David Bell, center, while arguing with umpire Ryan Additon after being called out on a checked swing in the first inning of a baseball game against the San Diego Padres, Saturday, June 19, 2021, in San Diego. (AP Photo/Derrick Tuskan) 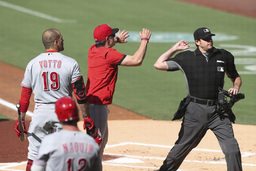 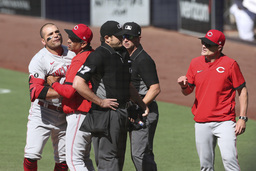 MINNEAPOLIS (AP) Cincinnati Reds first baseman Joey Votto served a one-game suspension from Major League Baseball on Tuesday, three days after he was ejected for arguing with an umpire.

Votto was already slated to rest in the finale of a two-game series at Minnesota, an afternoon start following a 12-inning contest on Monday night that was MLB's longest game of the season at 5:16. Shortly before first pitch, the Reds announced Votto was serving his punishment.

Votto and Reds manager David Bell were tossed in the first inning on Saturday at San Diego after a heated spat with home plate umpire Ryan Additon after Votto was called out on a checked swing. Padres catcher Webster Rivas appealed after Votto offered at a high, outside pitch, and third base umpire Chris Guccione confirmed that Votto went around.

Bell and coaches Delino DeShields and Freddie Benavides had to keep Votto away from Additon, who then ejected the player and the manager. Crew chief Jim Reynolds said after the game that Votto was booted because he ''just lost control.''

Votto, in his 15th season with the Reds, has three homers and 13 RBIs in 14 games since returning from a month-plus absence because of a broken thumb.