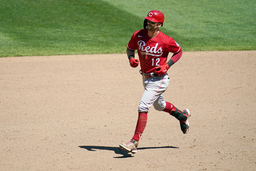 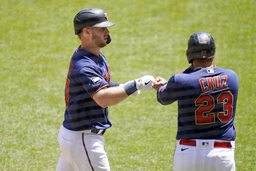 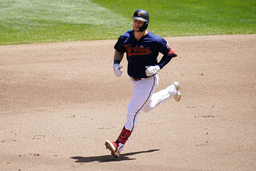 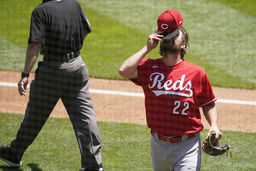 Cincinnati Reds pitcher Wade Miley puts his cap back on following an inspection for any illegal substance by umpires after the third inning of a baseball game against the Minnesota Twins, Tuesday, June 22, 2021, in Minneapolis. (AP Photo/Jim Mone) 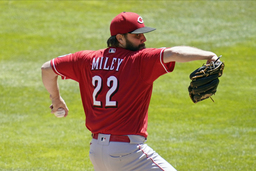 The boss was right, because the Reds had plenty of energy left for a late surge against Minnesota after the Twins took a game of back-and-forth rallies the night before.

Tyler Naquin went 4 for 4 with a three-run homer that broke a ninth-inning tie right after the ragged Cincinnati bullpen lost a five-run lead, and the Reds beat the Twins 10-7 to stop their five-game losing streak on Tuesday afternoon.

Amir Garrett got his fourth save in six chances with a scoreless ninth after fellow relievers Art Warren, Lucas Sims and Tejay Antone stumbled through a five-run eighth for Minnesota, which had its season-long five-game winning streak end.

''We keep pulling for each other, keep showing up, keep playing hard,'' said Naquin, who joined the Reds in February on a minor league contract.

Max Kepler hit a two-run homer, Trevor Larnach added a solo shot and Alex Kirilloff had the tying two-run double off Antone (2-0), but the right-hander in his first game back from the injured list recovered to record the last two outs of the inning.

Tucker Barnhart homered and had three RBIs and Jesse Winker hit a two-run double for the Reds, whose relief ERA (5.70) is the worst in the major leagues. Injuries have made an impact on that, to be sure, and Bell did not sound bothered by the way he's seen his relievers throw the ball lately.

''There's no question we're just going to keep getting better. There's been signs along the way,'' he said. ''I love the way the guys are approaching it.''

After grinding through a 12-inning victory on Monday night that lasted 5 hours, 14 minutes, the longest in MLB this year, the Twins experienced some bullpen problems of their own.

Alex Colome allowed three runs in the eighth, though third baseman Miguel Sano's second fielding error of the game made two of them unearned.

Then Hansel Robles (3-4), who has been one of the team's steadiest relief options, put himself in trouble with a one-out double by Nick Castellanos and by hitting Tyler Stephenson with a pitch before Naquin's 12th homer of the season gave the Reds a reason to smile on the way home.

''What a season he's having,'' Bell said. ''He's really settling in, and his talent is coming out.''

Wade Miley gave the Reds another strong start, too, with two runs allowed on a homer by Ryan Jeffers over seven otherwise-easy innings. Jeffers was the catcher for all 12 innings of the marathon game on Monday and returned to his crouch behind the plate again on Tuesday, as the Twins tried to shake off the bad news of star center fielder Byron Buxton's broken left hand.

''I'll give credit to Miley. He's been throwing the ball very well. He was just very sharp. He's a veteran pitcher who can do a lot of tricky things,'' Twins manager Rocco Baldelli said.

Miley, who has given up two earned runs in 11 of 13 starts this season, was exactly the pitcher the Reds wanted on the mound for this wrapup to a nine-game road trip. He's a quick worker who made a particular attempt to keep the pace on a day when he knew his position players would be tired.

''It's picking up the boys. That's what we do,'' said Miley, who threw 94 pitches without a walk.

Twins rookie Bailey Ober made his fifth start without a decision. He lasted 4 1/3 innings with four runs allowed.

''They had some good swings on him,'' Baldelli said. ''He probably left a few pitches where he didn't want them.''

Reds: Starting pitchers Sonny Gray (right groin) and Jeff Hoffman (right shoulder) have been scheduled for rehab assignments. Gray is expected to rejoin the Reds next week after making one three-inning start for Triple-A Louisville. ... Antone (right forearm) was activated from the 10-day injured list before the game, and OF Scott Heineman was sent to Triple-A Louisville.

Twins: With Buxton out, Gilberto Celestino returned from Triple-A St. Paul to play CF. Regular RF Max Kepler could also fill in there again, rebuilding stamina after missing time to a hamstring injury.

Reds: Following a day off on Wednesday, RHP Tony Santillan (0-1, 4.70 ERA) will take the mound to begin a four-game series against Atlanta on Thursday night.

Twins: After a day off on Wednesday, RHP Jose Berrios (7-2, 3.56 ERA) will pitch to open a four-game series against Cleveland on Thursday night. The Twins have won seven straight Berrios starts.