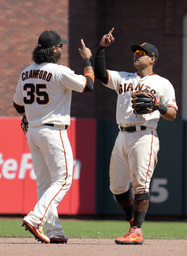 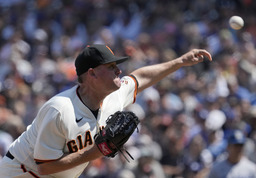 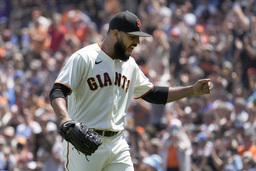 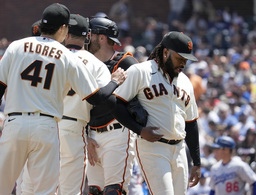 San Francisco Giants starting pitcher Johnny Cueto, right, walks off the mound as he was taken out during the sixth inning against the Los Angeles Dodgers in a baseball game Thursday, July 29, 2021, in San Francisco. (AP Photo/Tony Avelar) 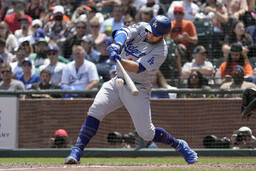 SAN FRANCISCO (AP) Brandon Crawford doubled home two runs in his first at-bat after coming back from a left oblique strain and the majors-leading San Francisco Giants beat the Los Angeles Dodgers 5-0 Thursday in the rubber match of a three-game series.

Wilmer Flores, Austin Slater and LaMonte Wade Jr. also drove in runs for San Francisco, which extended its NL West lead over Los Angeles to three games. The Dodgers were shut out for just the third time this season.

''We have so much respect for those guys, obviously,'' Dodgers manager Dave Roberts said. ''They're a very good ball club. They've earned this right now to this point.''

Johnny Cueto (7-5) earned his first win since June 25. He struck out five in 5 2/3 innings while walking two and allowing four hits.

''I kept telling myself that I needed to be very aggressive against these hitters because they're difficult and hard hitters,'' Cueto said through a translator.

''I thought it was Johnny's best outing in a long time,'' Giants manager Gabe Kapler said. ''I also thought his stuff was especially crisp. ... The fastball was as good as we've seen it in a long time.''

Crawford, who missed nine games while on the 10-day injured list, put the Giants up with his double to left in the first.

''The crowd was into it already there in the first,'' Crawford said. ''To be able to do something in that at-bat was pretty fun.''

Flores added an RBI double in the second and Slater singled home a run in the fourth.

The Dodgers were down 4-0 when they loaded the bases with two outs in the sixth, but lefty Garcia struck out Cody Bellinger on three pitches to end the threat.

''That was a pivotal spot,'' Roberts said. ''Could've changed the game, but they made the pitch when they needed to.''

Wade tacked on an insurance run for the Giants with an RBI double in the seventh, his first career hit off a left-handed pitcher. He was previously 0 for 31.

The Dodgers obtained LHP Danny Duffy and cash from the Kansas City Royals for a player to be named. The 32-year-old Duffy (4-3, 2.51 ERA) is on the 10-day injured list for the second time this season with a left flexor strain. He grew up in Lompoc, northwest of Los Angeles.

Dodgers: SS Corey Seager, out since May 15 with a fractured right hand, is expected to return this weekend. ''What day sort of depends on the training staff, but I do see him activated this weekend,'' Roberts said. ... Roberts also anticipates that OF Mookie Betts (right hip inflammation) will come off the injured list Sunday when he's eligible to return.

Giants: C Buster Posey missed the game after taking a foul ball off his mask Wednesday night, but Kapler said he did not have a concussion and was optimistic he could return to the lineup Friday. ... Crawford was activated from the 10-day IL earlier Thursday. ... RHP Aaron Sanchez (right bicep tightness) was reinstated from the 60-day IL. To make room on the roster, San Francisco optioned RHP John Brebbia to Triple-A Sacramento and designated OF Mike Tauchman for assignment.

Dodgers: RHP Tony Gonsolin (2-1, 2.38 ERA) starts in the opener of a three-game series in Arizona on Friday night. The Dodgers are 9-1 against the Diamondbacks this season.

Giants: RHP Kevin Gausman (9-4, 2.21) looks for his first win since July 11 in the opener of a three-game home series against Houston.