Not left out: Yankees get big lefty bats with Gallo, Rizzo 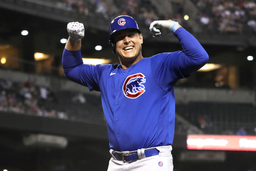 Chicago Cubs' Anthony Rizzo reacts after hitting a solo home run against the Arizona Diamondbacks in the fourth inning during a baseball game, Friday, July 16, 2021, in Phoenix. (AP Photo/Rick Scuteri)

NEW YORK (AP) Desperate for a powerful, left-handed bat to park balls in the short porch at Yankee Stadium, the New York Yankees got two of them.

Hours after announcing their trade to acquire All-Star slugger Joey Gallo from Texas, the playoff-chasing Yankees worked out a deal for longtime Chicago Cubs first baseman Anthony Rizzo on Thursday.

The swaps came on a day the Yankees lost at Tampa Bay 14-0, leaving them far behind Boston in the AL East and fourth in the chase for two wild-card spots.

Team officials, including owner Hal Steinbrenner and general manager Brian Cashman, have been holding meetings in nearby Tampa, Florida.

The Yankees made the moves ahead of the Major League Baseball trade deadline at 4 p.m. Friday. And the aggressive action left no doubt the direction they would take.

They are big-time buyers, for sure.

The Yankees got Rizzo for two minor leaguers, right-hander Alexander Vizcaino and outfielder Kevin Alcantara. Chicago will pay the Yankees $5,652,403 as part of the trade, covering all but $202,435 of the remainder of Rizzo's $16.5 million salary, which comes to a prorated share of the $570,500 minimum.

The 27-year-old Gallo is hitting .223 with 25 homers, 55 RBIs and a major league-leading 74 walks. While he was a Gold Glove-winning right fielder for Texas, Boone envisions Gallo playing a lot in left for the Yankees, who have Aaron Judge as their regular right fielder.

Rizzo is batting .248 with 14 home runs and 40 RBIs. The 31-year-old had been a fixture at Wrigley Field for a decade, and helped the Cubs break their long World Series drought with a championship in 2016.

Popular in the clubhouse and with Cubs fans, Rizzo didn't play in a 7-4 loss at home to Cincinnati on Thursday. The three-time All-Star and four-time Gold Glove winner can become a free agent after the season.

Both Rizzo and Gallo are both left-handed hitters, which the Yankees had seeking to add to a lineup that was predominantly right-handed.

''Sign me up for the guy that's on base almost 40% of the time and has power and provides the kind of potential balance for our lineup,'' Aaron Boone said of Gallo. ''And on top of it, he's a two-way player. This is a guy that really defends, can run and do all those things. It's hard to argue that we're not a lot better team adding Joey Gallo to us.''

The Yankees had been using a mix at first base this year with DJ LeMahieu playing there a lot. Luke Voit led the majors in home runs last year during the pandemic-shortened season, but the big first baseman has been injured for much of the year.

Gallo is owed $2.2 million from his $6.2 million salary. He is eligible for arbitration next winter and can became a free agent after the 2022 season.

Jon Daniels, Texas' president of baseball operations, said it was emotional to trade away a homegrown star.

''Obviously if we're in a different competitive spot, we weren't in a rebuilding situation, which we are and have acknowledged and talked about, this could look a little different,'' he said.

The Cubs have been in a prolonged slide that dropped them below .500, prompting speculation they would trade some of their stars.