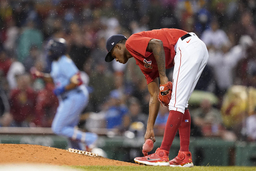 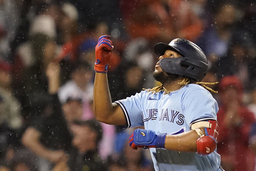 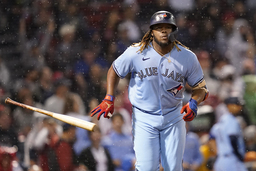 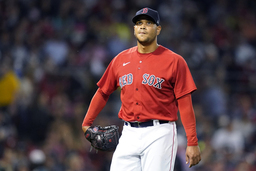 Boston Red Sox starting pitcher Eduardo Rodriguez walks to the dugout after being removed during the fourth inning of the team's baseball game against the Toronto Blue Jays at Fenway Park, Thursday, July 29, 2021, in Boston. (AP Photo/Elise Amendola)

Teoscar Hernandez hit a two-run double for the Blue Jays, who tagged the Red Sox for 16 hits and scored in six of the first seven innings while building a 12-0 lead. Every Toronto starter had at least one hit and drove in at least one run as the Blue Jays went 9 for 20 with runners in scoring position. Cavan Biggio was the only Toronto starter who didn't score a run.

Ryu (10-5) held the Red Sox to just two hits in six innings, struck out five and didn't walk a batter.

''Every one of his pitches was locating well tonight. He executed greatly tonight - just a lot of weak contact,'' Toronto catcher Reese McGuire said. ''He did a great job with some quick innings to get the offense back into the dugout.''

Bobby Dalbec hit an RBI double in the seventh for Boston. The Red Sox finished with just six hits.

The Blue Jays led 6-0 in the fifth with two runners on for Guerrero, who crushed his 33rd homer of the season when reliever Phillips Valdez started him with a change-up. The ball cleared the Green Monster as well as a billboard above it by several yards on its way to Lansdowne Street.

The Blue Jays split the four-game series at first-place Boston, which still leads the AL East heading to second-place Tampa Bay for a weekend series.

The Red Sox didn't score until the seventh inning, when Dalbec doubled off the wall in center field to score Christian Vazquez, whose one-out double off of reliever Tayler Saucedo was just the third hit of the night for Boston.

Before getting pulled in the fourth, Rodriguez walked George Springer with one out and a runner on base, then walked Guerrero to load the bases before walking Marcus Semien, adding another run for Toronto.

''It was up and down,'' Boston manager Alex Cora said. ''That last inning, that's what we're trying to avoid - the walks. He had all types of walks.''

Ryu said through a translator that he had only learned Thursday morning that his grandfather had died back home in Korea. Toronto manager Charlie Montoyo said Ryu's performance was admirable, especially under the circumstances.

''This was a big game for us and he's one of our best pitchers, if not the best,'' Montoyo said. ''To still pitch like that, that was unbelievable. He did a great job.''

Although there was little to cheer defensively for Boston, Hunter Renfroe prevented further damage when he robbed Randal Grichuk of a homer to right in the fourth inning. Renfroe ran down the ball and held on when he slammed hard into the low wall with his left hip. Boston's Alex Verdugo also reached over the wall in left the following inning to catch a foul by Biggio.

The Blue Jays will finally be back at home - meaning Toronto - this weekend.

The coronavirus pandemic and health protocols have kept the Blue Jays south of the Canadian border the past two seasons as they played ''home'' games in Buffalo, New York, and Dunedin, Florida, but the club was headed back home after the game and scheduled to host the Kansas City Royals on Friday night.

Blue Jays: OF Lourdes Gurriel Jr. was out of the lineup after leaving Wednesday night's game in the seventh inning when he took a pitch off his left elbow. Manager Charlie Montoyo said X-rays did not show a break and Gurriel would be day-to-day. ... The Blue Jays picked up closer Brad Hand in a trade with the Nationals for catching prospect Riley Adams. ''He's a great add and he's going to help out,'' Montoyo said.

Red Sox: Optioned RHP Tanner Houck to Triple-A Worcester one day after the rookie struck out seven over four innings in a start as Boston won to earn a split in a doubleheader. Houck allowed one run on two hits with one walk and had a 2.45 ERA in four starts for Boston. Hauk is expected back soon enough and is tentatively scheduled to start one of the games during a doubleheader a week from Saturday at Toronto. ''He's going to be a big part of what we're trying to accomplish. He's a big part of it already,'' Cora said.

Red Sox: LHP Martin Perez (7-6, 4.18) is scheduled to start Friday night as Boston opens a three-game set at Tampa Bay, which trails only the Red Sox in the AL East.