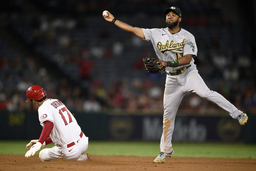 Oakland Athletics shortstop Elvis Andrus, right, throws to first after forcing out Los Angeles Angels' Shohei Ohtani at second base during the eighth inning of a baseball game in Anaheim, Calif., Thursday, July 29, 2021. Phil Gosselin was safe at first base. (AP Photo/Kelvin Kuo) 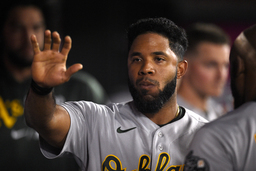 Oakland Athletics' Elvis Andrus celebrates in the dugout after scoring against the Los Angeles Angels during the seventh inning of a baseball game in Anaheim, Calif., Thursday, July 29, 2021. (AP Photo/Kelvin Kuo) 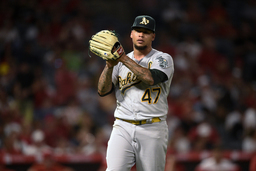 Oakland Athletics starting pitcher Frankie Montas claps while leaving the field after Los Angeles Angels' Phil Gosselin was forced out at first base to end the fifth inning of a baseball game in Anaheim, Calif., Thursday, July 29, 2021. (AP Photo/Kelvin Kuo) 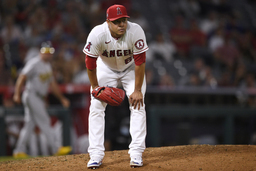 Los Angeles Angels relief pitcher Jose Quintana reacts after a throwing error on a pickoff attempt to first base resulting in a run scored by Oakland Athletics' Elvis Andrus during the seventh inning of a baseball game in Anaheim, Calif., Thursday, July 29, 2021. (AP Photo/Kelvin Kuo) 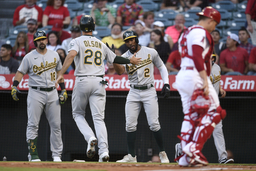 Oakland Athletics' Matt Olson, second from left, is congratulated by Mitch Moreland, left, and Starling Marte after Marte and Olson scored on a ground rule double by Ramon Laureano during the first inning of a baseball game against the Los Angeles Angels in Anaheim, Calif., Thursday, July 29, 2021. (AP Photo/Kelvin Kuo) 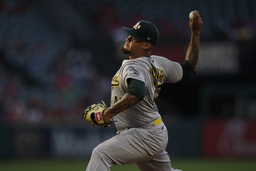 Marte, who was acquired in a trade from the Miami Marlins this week in exchange for left-hander Jesus Luzardo, went 1 for 4 with a walk and scored in the first inning. The A's scored three times in the opening inning with just one hit.

''It always makes you feel good when you contribute to a win right away and he did,'' A's manager Bob Melvin said of Marte. ''You look at the on-base percentages with (Mark) Canha and him right at the top and both of them are around .400. They both got on base to start the game and the next thing you know we have a three spot, so he made an impact definitely on his first day.''

Angels right-hander Dylan Bundy gave up three runs on just two hits, but walked four and hit a batter in 4 1/3 innings. Bundy (1-8) returned to the rotation with Alex Cobb dealing with a blister on his right index finger.

''I was really happy getting that deep into the game, mainly for the team aspect,'' said Bundy, who added that he has been working to refine his mechanics. ''We only had a limited amount of pitches to work with, not having thrown that many in the last month.''

Angels designated hitter Shohei Ohtani, who hit his MLB-leading 37th home run Wednesday and had gone deep in three of his previous four games, walked three times and struck out in four at-bats.

Montas (9-8) gave up three hits with three walks and had 10 strikeouts for the third time in his last four starts. The A's won their second consecutive game and earned their sixth straight victory over the Angels.

Montas threw a season-high 109 pitches and ended his night with a three-pitch strikeout of Jack Mayfield.

''Man, I feel like at the beginning of the season I was trying to be too perfect with my (split-finger pitch),'' Montas said. ''Now I'm just throwing it and letting it do its thing. I'm not trying to do too much with it.''

Canha was hit by a Bundy pitch to open the game, while Marte walked in his first plate appearance with Oakland. A walk to Matt Olson loaded the bases before Jed Lowrie grounded out to score Canha.

Ramon Laureano followed with a two-run double to left field to give the A's a 3-0 lead.

''That one curveball (from Bundy) to Laureano, that was the big blow actually,'' Angels manager Joe Maddon said. ''Other than that, he had pretty good success. . I thought he was good and that was as good as I have seen him in a while.''

Oakland did not pad its lead until the seventh inning when Jose Quintana's errant pickoff throw to first base allowed Elvis Andrus to walk home from third for a 4-0 advantage.

In his longest outing since moving to the bullpen, Quintana went 2 1/3 innings with six strikeouts, including striking out the first five batters he faced. Angels right-hander Austin Warren retired all four batters he faced in his major league debut.

Marte's first hit with the A's was a single in the fifth inning.

In his first game with the A's, Marte got the start in center field while Laureano was moved to right field. Melvin said the decision wasn't a hard one.

''It wasn't even a conversation with Ramon,'' Melvin said. ''Ramon actually came to me and said `Play this guy in center field.' That wasn't an issue there. Everybody is just happy to have him. We want to make him as comfortable as he can be.''

Laureano had made 75 of his 82 starts, before Thursday, in center. Marte played all 63 of his games for the Marlins in center.

Angels: OF Mike Trout had a follow-up visit with a doctor, following an MRI this week, and all signs were positive, according to manager Joe Maddon. Trout, who has been out since May 17, ran the bases twice last week but has not tested his right calf strain since.

The A's will send right-hander Chris Bassitt (10-3, 3.46 ERA) to the mound Friday, while the Angels will counter with Patrick Sandoval (3-4, 3.52) as the left-hander returns to the mound following his near no-hitter on Saturday at Minnesota.