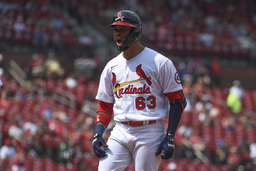 St. Louis Cardinals' Edmundo Sosa reacts after hitting an RBI-single during the sixth inning of a baseball game against the Minnesota Twins on Sunday, Aug. 1, 2021, in St. Louis. (AP Photo/Joe Puetz) 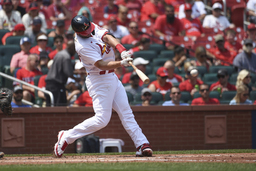 St. Louis Cardinals' Paul Goldschmidt hits an RBI-single during the third inning of a baseball game against the Minnesota Twins on Sunday, Aug. 1, 2021, in St. Louis. (AP Photo/Joe Puetz) 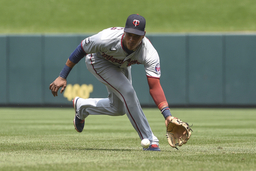 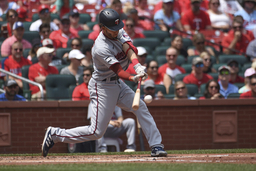 Minnesota Twins' Andrelton Simmons hits a two-run single during the second inning of a baseball game against the St. Louis Cardinals on Sunday, Aug. 1, 2021, in St. Louis. (AP Photo/Joe Puetz) 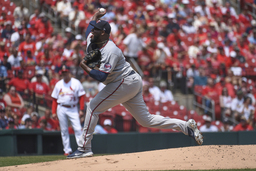 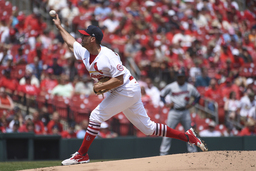 Wainwright (9-6) allowed three runs and six hits in an 85-pitch stint. He struck out five and walked one in his 176th career victory.

Sosa went 3 for 3, scoring twice and driving in two runs. Dylan Carlson, who also had three hits, and Tommy Edman each doubled twice for St. Louis, which has won four of six.

Jorge Polanco homered for the Twins, who have lost four of five.

The 39-year-old Wainwright, who's spent his entire 16 seasons in the majors with the Cardinals, beat Minnesota for the first time in his career. He's beaten 26 of the other 29 teams in the big leagues - he is 0-1 against Texas, Baltimore and the New York Yankees.

''I don't know if I'll be able to chip those away,'' Wainwright said.

Wainwright made his first appearance against Minnesota since a 3-1 loss on June 26, 2009.

Alex Reyes picked up his 25th save in 26 opportunities with a 1-2-3 ninth inning.

Wainwright's biggest contribution may have come in a fourth inning at-bat. He battled Minnesota starter Michael Pineda (4-6) for 10 pitches before hitting a hard grounder to third baseman Luis Arraez, who threw a one-hopper that Miguel Sano was unable to handle at first base. Edman scored on the error to put St. Louis ahead to stay 3-2.

''It was a very impressive moment,'' Sosa said.

''What a winner,'' St. Louis manager Mike Shildt said. ''A tremendous at-bat. He worked his tail off.''

Wainwright also added a pair of sacrifice bunts. A good showing at the plate for him - normally a decent hitter for a pitcher, he's just 1 for 34 (.029) this season.

''I've been working really hard on it,'' Wainwright said of his hitting stroke. ''I know I have nothing to show for it. My numbers look horrible, the worst in the game, probably. But I've been taking better at-bats. Really working on my strike zone discipline.''

''It did not affect me at all, had nothing to do with today's outing,'' Pineda said.

His manager, Rocco Baldelli, disagreed calling it, ''a big moment in the game.''

''The longer the at-bat went, it looked like the more comfortable he got,'' Baldelli said.

The Twins took a 2-0 lead on a two-run single by Andrelton Simmons in the first inning.

Yadier Molina moved to fourth on the Cardinals all-time hit list with a pair of singles. He now has 2,075 hits and passed Albert Pujols, who had 2,073.

The Cardinals finished July 9 1/2 games behind first-place Milwaukee in the NL Central. The last time they were that far behind entering August was 1999 when they were 11.5 games back of Houston with a 52-52 mark.

St. Louis LHP J.A. Happ will make his first start for the Cardinals on Wednesday against Atlanta. Happ (5-6, 6.77) was acquired from Minnesota in exchange for RHP John Gant and LHP Evan Sisk on Friday,

Cardinals: RHP Jack Flaherty tossed three innings in his second rehab start at Triple-A Memphis on Sunday. He gave up two runs on four hits. He struck out five and walked one. Flaherty was placed on the 60-day injured list on June 1 with a left oblique strain.

Cardinals: LHP Jon Lester (3-5, 5.02) will make his Cardinals debut in the first game of a three-game set against Atlanta LHP Max Fried (7-7, 4.32) on Tuesday. Lester was acquired from Washington in a trade for OF Lane Thomas at the deadline. Lester has pitched at least five innings in all 13 career starts against the Braves.