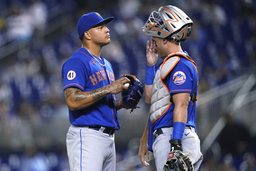 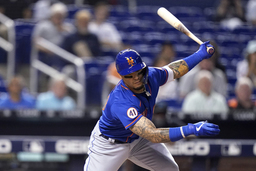 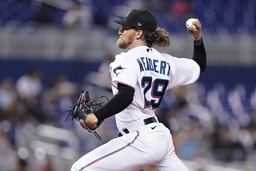 Isan Diaz also homered, Bryan De La Cruz had three hits and Lewis Brinson had two hits and scored twice for the last-place Marlins, who have won the first two of the four-game series.

''We had dicey moments at times but they worked through those dicey moments,'' Miami acting manager James Rowson said. ''Our guys did a nice job and once again did it as a team effort.''

Home plate umpire Stu Scheurwater ejected New York manager Luis Rojas before the bottom of the seventh after Brandon Nimmo was called out on strikes to end the inning. The Mets have lost five of six and are 8-11 since the All-Star break. Their lead dropped to 1 1/2 games ahead of second-place Philadelphia.

''This is a time as a team where as a team you come together as brothers and as guys that understand that we're going to fight for each other day in and day out,'' Mets catcher James McCann said.

For New York, frustrations boiled over when shortstop Javier Baez exchanged words with Marlins reliever Richard Bleier after Bleier retired Baez on a fly to right that ended the eighth.

''Javi is a guy that wears his emotions,'' Rojas said. ''I think he heard something that was said to him and he reacted to that. There's no frustration to that. These guys fought until the last out of the game.''

The Mets were limited to five hits by Neidert (1-1) and four relievers.

''We have to put in the work with our hitters and make sure that they are going into the game ready and more aggressive in the zone, rather than expanding,'' Rojas said.

Neidert allowed three runs and three hits, struck out five, walked four and hit a batter in 5 2/3 innings. The 24-year-old righty was in his 11th game in the majors.

''He did a great job giving that lineup fits,'' Rowson said. ''That's a tough lineup that can do some damage when they connect.''

Jackson's homer put Miami ahead 1-0 in the second. Acquired from the Atlanta Braves on Friday at the trade deadline, Jackson drove a pitch from Taijuan Walker (7-6) over the center field wall.

''You get so caught up in the game that it's not really surreal until after the game and things start settling in,'' Jackson said. ''I was trying to look for a pitch that I could do something on. I was able to get something over the plate and put a good swing. When you put a good swing, good things happen.''

The Marlins increased their lead in the third on Diaz's solo homer and De La Cruz's two-run single.

The Mets got to within 4-3 in the sixth on Dominic Smith's second sacrifice fly and J.D. Davis' run-scoring double that chased Neidert.

The Marlins padded their lead on Jorge Alfaro's RBI double in the eighth.

Anthony Bender relieved Neidert and got the last out in the sixth while David Hess and Bleier combined to retire six straight.

Dylan Floro allowed McCann's RBI double with two outs in the ninth before retiring pinch-hitter Brandon Dury on a grounder for his fourth save.

In addition to his multi-hit performance, De La Cruz tracked down and caught McCann's drive to deep right that could have scored Michael Conforto from first. De La Cruz also showed off his arm in the sixth, when he caught Baez's shot in medium right and made a perfect throw home that kept Jeff McNeil at third. McNeil eventually scored on Smith's deep fly to center.

Alfaro, the Marlins regular catcher, made his first career start as an outfielder Tuesday, when he played left-field and hit fifth. Alfaro had two putouts, including his catch of Pete Alonso's drive to the warning track in the seventh. Jackson could get the bulk of playing time the remainder of the season. Alfaro s previous experience in the outfield consists of a nine-inning stint in leftfield against Philadelphia May 27 and three innings in right-field against Atlanta last season. With veteran Sandy Leon still on the roster, the Marlins are trying to avoid the three catcher situation, prompting Alfaro's move to the new position.

Mets RHP Miguel Castro was reinstated from the injured list after testing negative for COVID-19. RHP Geoff Hartlieb was optioned to Triple-A Syracuse. ... The Marlins placed LHP Trevor Rogers on the bereavement list.