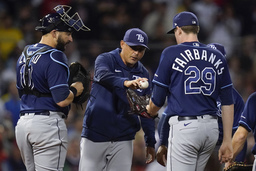 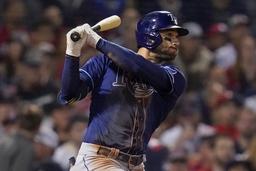 Tampa Bay Rays Kevin Kiermaier follows through on a double during the eighth inning against the Boston Red Sox during Game 4 of a baseball American League Division Series, Monday, Oct. 11, 2021, in Boston. (AP Photo/Charles Krupa) 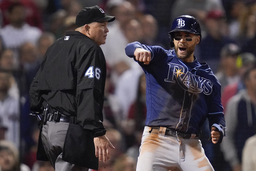 Tampa Bay Rays Kevin Kiermaier reacts after scoring on a double by Randy Arozarena during the eighth inning against the Boston Red Sox during Game 4 of a baseball American League Division Series, Monday, Oct. 11, 2021, in Boston. (AP Photo/Charles Krupa)

The Tampa Bay Rays have a lot to feel good about, even if the best regular season in franchise history was followed by a loss to Boston in the AL Division Series.

''These guys should be very proud. I know I am, of what was accomplished. You're allowed to be proud and also disappointed at the same time,'' manager Kevin Cash said, reflecting on winning 100 games for the first time only to fall to the Red Sox in the ALDS.

Despite having one of the lowest payrolls in baseball and a roster devoid of household names, the 2020 AL champions overcame injuries that decimated the pitching staff to finish with the best record in the league for the second straight year and win the AL East by eight games over Boston and the New York Yankees.

''Coming into spring training, there's no denying this team had high aspirations. ... But I can't look at this team as a disappointment,'' Cash said. ''I would say that's unfair.''

So would defensive whiz Kevin Kiermaier.

''I always say there's no moral victories. We came up short, no doubt about that. ... Tip our caps to them. They were great. They beat us fair and square,'' the 31-year-old center fielder said.

''Once again, we would have loved to get to the next step and get back to a World Series and try to take that next step. It just wasn't our time, but the winning way, it's going to continue here,'' Kiermaier added. ''There's just too much talent in our organization. Who knows what's going to happen moving forward, but we've got a great thing going here.''

The Rays made the playoffs for a franchise-best third straight season while also claiming consecutive division titles for the first time. With seven postseason appearances since 2008, only the Dodgers (11), Yankees (10) and Cardinals (9) have earned more berths over that span.

The offense was second in the majors with 857 runs and sixth with 222 homers. The pitching staff, meanwhile, had the fourth-best ERA (3.67) in baseball. The bullpen had the best ERA (3.23) in the AL.

One reason the future is so bright for the Rays is 20-year-old shortstop Wander Franco, who was promoted to the majors in June and played up to his billing as baseball's No. 1 prospect. He hit .288 with seven homers and 39 RBIs in 70 games, then sparkled in the postseason with a .368 batting average, two home runs, two doubles and four RBIs in four games against the Red Sox.

Last year's postseason breakout star Randy Arozarena had another impactful October, becoming the first player in major league history to homer and steal home in the same playoff game. He hit .333, scored four runs and drove in three in the ALDS after an outstanding rookie season saw him bat .274 with 20 home runs, 69 RBIs and 20 steals.

Once again, it figures to be a busy winter for general manager Erik Neander, who faces some difficult roster decisions.

Trade deadline acquisition Nelson Cruz, who along with Franco made the team stronger offensively down the stretch, and pitchers Michel Wacha, Collin McHugh and David Robertson are among the players that could become free agents.

Pitcher Tyler Glasnow, who's expected to miss 2022 while recovering from Tommy John surgery, is eligible for arbrtration, as are pitchers Nick Anderson, Ryan Yarbrough and Andrew Kittredge, infielders Joey Wendle and Yandy Diaz and outfielders Austin Meadows and Manuel Margot.

Neander must also decide whether to pick up an option on the contract of catcher Mike Zunino, who hit 33 homers this season.