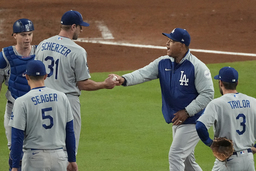 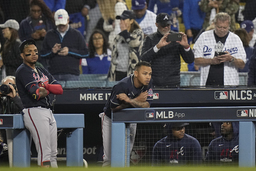 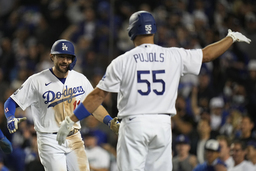 ATLANTA (AP) The Atlanta Braves know what happened last October and want to avoid a repeat. The Los Angeles Dodgers plan on an encore.

Atlanta held 2-0 and 3-1 leads in the NL Championship Series before the Dodgers won three consecutive games in a playoff entirely at the neutral ballpark of Arlington, Texas, then beat Tampa Bay for their first World Series title since 1988.

The host Braves won the first two games of this year's NLCS, then LA took two of three at Dodger Stadium forcing a Game 6 back at Truist Park on Saturday night with the Braves still one win from their first Series trip since 1999.

''I think we've got a mental advantage right now, getting back on that plane and going back there playing Game 6,'' Dodgers manager Dave Roberts said Friday. ''History's a powerful thing to the mind, and so we feel good and I think that we're going to use it to our advantage.''

Even so, Roberts acknowledged ''at the end of the day we still got to go out there and play a good baseball game.''

Facing elimination, the Dodgers turned up their power game to beat the Braves 11-2 on Thursday night.

First baseman Freddie Freeman says the Braves must prove they won't follow the same path to another collapse. Atlanta has a revamped outfield and home-field advantage,

''It seems because every day it's brought up the last couple days,'' Freeman said of last year's collapse. ''So I don't think we have a choice until we kill that narrative. We're up 3-2 and we're going home. That's a great position to be in.''

Max Scherzer is scheduled to start Saturday against Atlanta's Ian Anderson and Walker Buehler is available to start for the Dodgers on Sunday.

Taylor became the 11th player to hit three homers in a postseason game and the first to accomplish the feat with his team facing elimination.

''I think for us it's always just been about winning one game and we try to keep that mentality all year, do everything we can to win tonight, and just sort of take it one day at a time,'' Taylor said.

Anderson said Thursday the Braves are ''definitely on a mission to kind of dispel'' the repeat of their 2020 NLCS loss.

Anderson lasted only three innings in Atlanta's 5-4 win in Game 2. Scherzer was pulled after 4 1/3 innings with what he said was a dead arm on two days' rest after getting his first career save in the Division Series finale at San Francisco.

Roberts said 36-year-old left-hander David Price is replacing left-hander Joe Kelly on the roster. Kelly left in the first inning Thursday night with tightness in his right biceps and won't be eligible to return in the World Series should the Dodgers advance.

Roberts also revealed Friday that left-hander Justin Bruihl wasn't available in Game 5 due to a sore arm and may be replaced. Bruihl was receiving treatment on Friday before attempting to throw. He experienced the soreness while warming up on Thursday night.

Roberts said Bruihl ''wanted to be out there but just his arm wouldn't let him. ... We are going to bring an arm just in case he can't go.''

Roberts said he has not decided on a possible replacement for Bruihl.