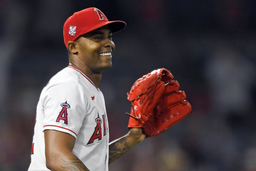 Los Angeles Angels relief pitcher Raisel Iglesias smiles after the final out in the team's 8-7 win over the Colorado Rockies in a baseball game on July 28, 2021, in Anaheim, Calif. Iglesias agreed to a four-year, $58 million deal Wednesday night, Dec. 1, 2021, to return to the Angels. (AP Photo/John McCoy, File)

Iglesias was outstanding in his first season with the Angels after they acquired him in a trade with Cincinnati a year ago.

The Cuban right-hander had 34 saves while going 7-5 with a 2.57 ERA and 103 strikeouts with only 12 walks in 65 appearances. His 8.58 strikeout-to-walk ratio was the best of his career, and he finished 11th in the AL Cy Young voting while repeatedly going multiple innings for the Angels, including eight saves longer than three outs.

The Angels declined to trade Iglesias at the deadline because they saw him in their long-term plans. When Iglesias turned down an $18.4 million qualifying offer last month, Angels general manager Perry Minasian said he remained confident they could reach a deal.

Iglesias, who turns 32 next month, was likely the most desired reliever on the free agent market after his strong performance for the Angels on the back of six solid seasons for the Reds, who signed him in 2014, several months after he defected.

Iglesias has a career ERA of 3.06 with 140 saves, including at least 28 saves in each of the past four full major league seasons despite playing for four teams that finished with losing records.

Minasian is focused on rebuilding the Angels' pitching staff after they finished 22nd in the majors in ERA during the latest in a decade of mostly poor mound performance.

Iglesias will be joined in the Angels' bullpen by Aaron Loup, who agreed to a two-year, $17 million contract as a free agent last month. The veteran left-hander also was one of the majors' most effective relievers last season for the New York Mets.

Los Angeles signed right-hander Noah Syndergaard to a one-year, $21 million contract to join Shohei Ohtani in their rotation. They also added right-hander Michael Lorenzen, a versatile former teammate of Iglesias in Cincinnati who could contribute in the rotation or the bullpen.

To make room on their roster, the Angels designated right-hander Sam Selman for assignment.