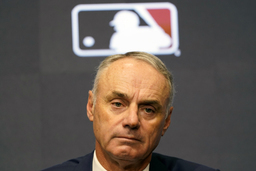 NEW YORK (AP) Major League Baseball and the players' association are scheduled to meet Thursday in the first negotiations between the parties since labor talks broke off Dec. 1.

The planning of the meeting was disclosed Tuesday to The Associated Press by a person familiar with the negotiations who spoke on condition of anonymity because no announcement was made.

MLB has been preparing a new proposal for the union, several people familiar with the talks have said. The meeting will end a 42-day gap between economic talks, with negotiations limited to peripheral issues.

Management locked out the union on Dec. 2 following the expiration of the collective bargaining agreement, the sport's ninth work stoppage but first since a 7 1/2-month strike in 1994-95.

The dispute threatens spring training, which is scheduled to start Feb. 16 in Florida and Arizona.