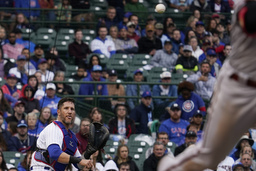 Chicago Cubs catcher Yan Gomes throws out Arizona Diamondbacks' Yonny Hernandez at first base during the sixth inning of a baseball game in Chicago, Saturday, May 21, 2022. (AP Photo/Nam Y. Huh) 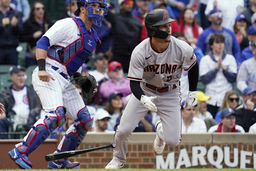 Arizona Diamondbacks' Alek Thomas leaves the batter's box after hitting an RBI single against the Chicago Cubs during the seventh inning of a baseball game in Chicago, Saturday, May 21, 2022. (AP Photo/Nam Y. Huh) 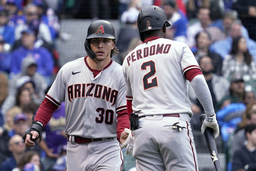 Arizona Diamondbacks' Jake McCarthy, left, celebrates with Geraldo Perdomo after scoring on a single by Alek Thomas during the seventh inning of the team's baseball game against the Chicago Cubs in Chicago, Saturday, May 21, 2022. (AP Photo/Nam Y. Huh) 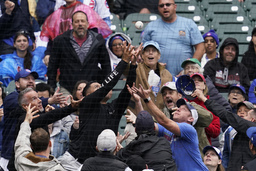 Fans reach to catch a foul ball during the fifth inning of a baseball game between the Chicago Cubs and the Arizona Diamondbacks in Chicago, Saturday, May 21, 2022. (AP Photo/Nam Y. Huh) 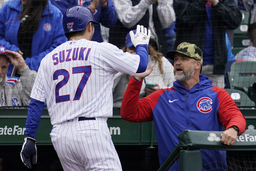 Chicago Cubs' Seiya Suzuki (27), of Japan, is congratulated by manager David Ross, right, after scoring on a one-run single by Yan Gomes during the third inning of a baseball game against the Arizona Diamondbacks in Chicago, Saturday, May 21, 2022. (AP Photo/Nam Y. Huh) 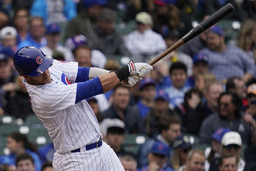 Chicago Cubs' Yan Gomes hits a one-run single against the Arizona Diamondbacks during the third inning of a baseball game in Chicago, Saturday, May 21, 2022. (AP Photo/Nam Y. Huh)

CHICAGO (AP) With the game tied at 4 in the top of the 10th inning, the Cubs' Rowan Wick zipped a couple of fastballs past Arizona's Daulton Varsho before Varsho settled into a high-pressure at-bat.

Varsho drilled a two-out, three-RBI double off Wick (1-1), then scored himself on Andrelton Simmons' throwing error to lift the Diamondbacks to a 7-6 comeback win over Chicago.

''I just knew I had an opportunity (on the throw) to get to third and still give us a chance to score another run there,'' Varsho said. ''When it got by (Yan Gomes) and hit the brick (behind home plate), I was like I'm just going to keep going. It's kind of a pinball machine back there with all the bricks.''

Varsho couldn't recall the last time he'd made it all the way home without actually knocking a ball out of the park.

''Might've been since little league, but it's been a long time,'' said Varsho, who finished 3 of 5 with three RBIs and is second on the Diamondbacks with eight doubles this season.

Arizona only got one hit off Cubs starter Justin Steele, but came to life against Chicago's bullpen, riding a three-run eighth inning into extras after falling behind 4-0.

''Our guys didn't shut down,'' Diamondbacks manager Terry Lovullo said. ''They had every right to. It's a team that has a great heartbeat. I've been talking about that this whole road trip, it's a common denominator for us.''

Diamondbacks relievers Joe Mantiply, J.B. Wendelken, Ian Kennedy (3-2) combined for a pair of scoreless innings before Mark Melancon entered in the 10th for his ninth save of the season.

Against Melancon, Simmons singled to shortstop to score Christopher Morel from second. Simmons moved into scoring position by stealing second with Ian Happ representing the tying run at the plate. Melancon fanned Happ before Jonathan Villar hit his fifth double of the year to score Simmons. But Seiya Suzuki struck out.

Steele threw five scoreless innings and fanned nine, coming up one strikeout short of matching his career high. He allowed one hit and walked two. When Cubs manager David Ross pulled Steele, Lovullo figured his group had a chance to claw back against Chicago's relievers.

''We drove up (Steele's) pitch count, I think it was high 80s . It was what we believe in,'' Lovullo said. ''Just grind down your at-bats, see what you can get into in the bullpen and that's what happened.''

Alek Thomas brought Arizona's bats to life in the seventh with a two-out single to center to score Jake McCarthy. Then Pavin Smith smacked the first pinch-hit homer of his career to center to lead off the eighth, cut the deficit to two runs and end Chicago reliever Scott Effross' streak of 14 appearances without an earned run.

''That was kind of an electric moment for us,'' Varsho said. ''Gained some confidence back, and just good for our whole lineup.''

McCarthy doubled off David Robertson with two outs, scoring Ketel Marte to close the gap further before Varsho's single to center brought McCarthy home to tie it at four.

Chicago has lost four straight after winning six of eight before Arizona came to town.

Frank Schwindel and Patrick Wisdom hit back-to-back home runs in the second inning, coming a day after Christopher Morel and Ildemaro Vargas recorded the club's first consecutive home runs since Wisdom and Alfonso Rivas did it against the Philadelphia Phillies on Sept. 14, 2021.

Cubs catcher Willson Contreras left his second straight game early, this time with an apparent hamstring injury after he started running to third base on a fouled grounder in the third.

The 30-year-old Venezuelan is hitting .258 with 14 RBIs and five homers so far this year.

''The doctors are checking him out,'' Ross said. ''There's definitely something going on. We'll find out how extensive.''

Diamondbacks: 3B Josh Rojas left the game with a left hand contusion he sustained while striking out in the first inning, one day after a three-home run outing. ... Varsho moved back to catcher from designated hitter as Arizona continues to rotate catchers with Carson Kelly (toe fracture) and Jose Herrera (undisclosed) on the 10-Day-IL. ... Jordan Luplow moved to designated hitter and Ketel Marte started at second base after off days on Friday.

Cubs: IF Nico Hoerner (ankle) looked to be ''about 80%, 85%'' while running the bases on Saturday for the first time since his injury, manager David Ross said. . LHP Sean Newcomb (ankle) threw a bullpen session and is eligible to return from the 15-day IL on Monday. ... IF David Bote (shoulder surgery) is 1 of 6 at the plate two games into a rehab assignment with Triple-A Iowa. Bote and Clint Frazier (appendicitis) are both ''working their way back in,'' Ross said, and he won't rush either player back.

Arizona RHP Merrill Kelly (3-2, 3.27 ERA) is set to face Chicago LHP Wade Miley (1-0, 2.70 ERA) in Sunday afternoon's series finale. Kelly will look to bounce back after a May 17 start against the Los Angeles Dodgers in which he gave up eight earned runs on five hits in two innings. Miley allowed one hit and struck out six in seven scoreless innings in a May 16 win over the Pittsburgh Pirates.