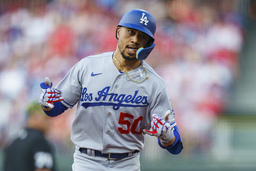 Los Angeles Dodgers' Mookie Betts reacts to hitting a solo home run against the Philadelphia Phillies during the third inning of a baseball game Saturday, May 21, 2022, in Philadelphia. (AP Photo/Chris Szagola) 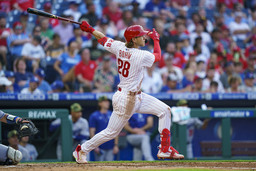 Philadelphia Phillies' Alec Bohm hits a two-run home run during the third inning of a baseball game against the Los Angeles Dodgers, Saturday, May 21, 2022, in Philadelphia. (AP Photo/Chris Szagola) 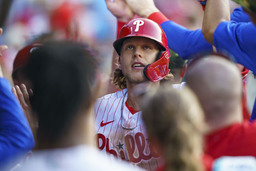 Philadelphia Phillies' Alec Bohm celebrates his two-run home run with teammates during the third inning of a baseball game against the Los Angeles Dodgers, Saturday, May 21, 2022, in Philadelphia. (AP Photo/Chris Szagola) 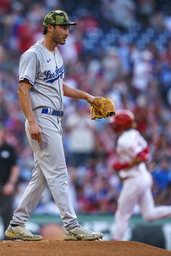 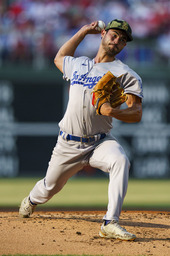 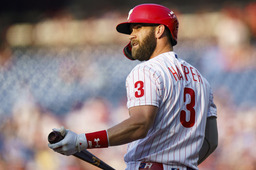 Philadelphia Phillies' Byrce Harper looks on after striking out during the first inning of a baseball game against the Los Angeles Dodgers, Saturday, May 21, 2022, in Philadelphia. (AP Photo/Chris Szagola)

PHILADELPHIA (AP) Mookie Betts stumbled rounding second base - a rare misstep for one of baseball's most all-around All-Stars - and braced his fall with his left hand. Betts popped up clutching his left arm as he bounced back to second.

His stinger temporarily gave the Dodgers quite a scare.

His right arm was at full strength and with one throw, he helped keep Los Angeles' wining streak alive.

Betts homered, doubled and singled, knocked in three runs, threw out the potential go-ahead run at the plate and sparked the Los Angeles Dodgers to their seventh straight win, 7-4 over the Philadelphia Phillies on Saturday night.

''That's why he's one of the best players in baseball,'' manager Dave Roberts said. ''What he did in the box, what he did in right field, he's just playing elite baseball right now. We need every bit of it.''

Betts, the five-time All-Star and 2018 AL MVP, about did it all with his arm and at the plate to help the Dodgers rally from a 4-1 hole. He also drew a walk.

''Once I kind of changed my mind just to enjoy the process in working each and every day, let the game be the game, it's kind of come out being pretty good,'' Betts said.

Gavin Lux lined the go-ahead single to right over a drawn-in infield in the eighth inning for a 5-4 lead. Cody Bellinger scored on Searanthony Dominguez's wild pitch to make it 6-4.

Jose Alvarado (0-1) allowed two hits to open the eighth and took the loss. Daniel Hudson (2-3) pitched 1 1/3 scoreless inning of relief and earned the win. Craig Kimbrel, the last of eight Dodgers pitchers, worked a scoreless ninth for his ninth save.

Austin Barnes hit his fourth homer of the year in the ninth for a 7-4 lead.

Betts preserved a tie game for the Dodgers in the seventh after the Phillies loaded the bases with one out. Hudson retired Alec Bohm on a low liner to right and Betts' one-hop throw easily beat a sliding Odubel Herrera at the plate for the double play. What made the inning-ending out more painful for the Phillies, had Herrera stayed at third, Bryce Harper would have hit with the bases loaded.

''That's a good outfielder. He made a really good throw,'' Girardi said.

Betts has three outfield assists in 37 games this season after totaling only two from 2020-2021 in 168 outfield games.

Harper went 1 for 4 as the designated hitter in his first game in a week. The 2021 NL MVP was one of the hottest hitters in baseball before he was forced out of the lineup. He won NL player of the week honors for batting .609 (14 for 23) with three homers, six doubles, eight RBIs and a 1.904 OPS in six games, three of them at Dodger Stadium.

Harper had a platelet-rich plasma injection in his right elbow and the lingering soreness kept him out of five straight games.

The Phillies bats had been slumbering, with just four runs scored and three losses over the first four games of the homestand without Harper. Perhaps buoyed by Harper's return, the Phillies scored four runs through four innings in a bullpen game for the Dodgers.

Leading 1-0 in the second, Bohm hit a two-run homer, his third of the season, off Mitch White for a 3-1 lead.

Kyle Schwarber, batting only .199 entering the game, hit a solo shot in the fourth for a 4-1 lead. Schwarber's homer tied him for first in the National League with 10. It was only his second at home and first since opening day.

Aaron Nola couldn't hold the lead and still has not won since opening day.

Betts was Nola's nemesis in this one. Betts crushed his ninth homer of the season into the left field seats in the third and tied the game 1-all. One Phillies fan unimpressed by the souvenir chucked the ball back onto the field.

Betts added a two-run double in the fifth that pulled the Dodgers to 4-3 but he took a hard stumble as he rounded second base trying for a triple. Betts made it back to the bag and a trainer and Roberts checked on their star slugger. Betts said he was fine and stayed in the game.

Betts said his shoulder went numb for a moment until it came back to life.

Good news for the Dodgers.

''That's a great player having a great night. The thing about Mookie is, there's nothing he can't do,'' Girardi said.

Nola, who struck out nine in 5 1/3 innings, gave up the lead in the sixth on Will Smith's fourth homer of the year that made it 4-4.