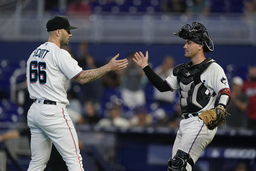 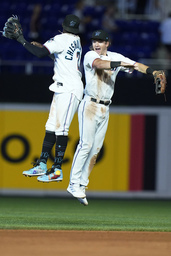 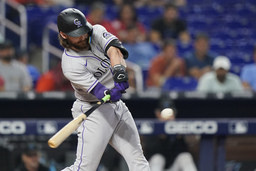 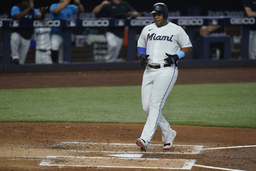 Miami Marlins' Jesus Aguilar scores on a single by Miguel Rojas during the second inning of a baseball game against the Colorado Rockies, Thursday, June 23, 2022, in Miami. (AP Photo/Wilfredo Lee) 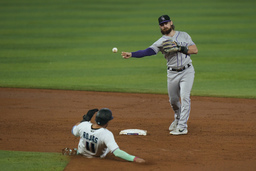 Colorado Rockies second baseman Brendan Rodgers throws to first for a double play after tagging second to put out Miami Marlins' Miguel Rojas (11) then Nick Fortes at first during the second inning of a baseball game, Thursday, June 23, 2022, in Miami. (AP Photo/Wilfredo Lee) 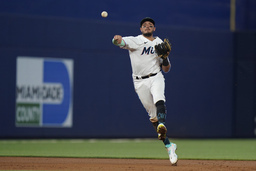 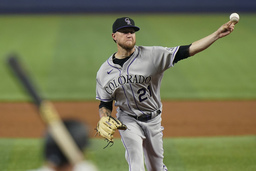 MIAMI (AP) Avisail Garcia drove in the go-ahead run on a fielder's-choice grounder in the eighth inning, and the Miami Marlins beat the Colorado Rockies 3-2 on Thursday to complete a three-game sweep.

Four relievers combined to throw 4 1/3 scoreless innings for the Marlins, including Steven Okert (5-0), who pitched a scoreless eighth to pick up his second win of the series.

Tanner Scott struck out the side in the ninth for his seventh save.

''Every win you get is big because you don't know who's winning or losing in the other divisions,'' Marlins manager Don Mattingly said. ''With wild card spots being up for grabs, there's a lot to play for.''

Miami's Jon Berti had two hits and stole two bases, extending his streak of successful attempts to a club-record 21.

''Some games you're going to score eight runs and hit three home runs but some nights you have to scratch and claw and baserunning is a big part of that,'' Berti said.

Rodgers doubled twice, tripled and singled for the Rockies, who stranded 13 runners and were 1-for-11 with runners in scoring position.

''I am going to do my best to keep the team in position to win a ballgame,'' Freeland said.

Marlins starter Braxton Garrett was lifted after consecutive two-out singles from Ryan McMahon and Jose Iglesias in the fifth. Garrett allowed two runs on nine hits and one walk, striking out seven.

''It's awesome to get a sweep, just in general when I'm on the mound,'' Garrett said. ''I scattered some hits there, gave up a few runs but I managed to keep us in the game. Definitely happy about that.''

Rodgers hit an RBI double and scored on Ryan McMahon's single to give Colorado a 2-1 lead in the third before Jorge Soler's sacrifice fly in the bottom half tied it.

''I felt good, went after them and attacked them,'' said Pop, who arrived in Miami three hours before the game. ''I can compete and do really well in this level. It's just a matter of trusting your stuff and trying to get better every time out there.''

Rockies: OF Randall Grichuk rested after being hit on his left hand by a pitch Wednesday.

Marlins: RHP Sandy Alcantara (7-2, 1.72) will attempt to win his second consecutive start against the NL East-leading Mets in the opener of a three-game home series Friday night. RHP Taijuan Walker (5-2, 2.88) is scheduled to start for New York.