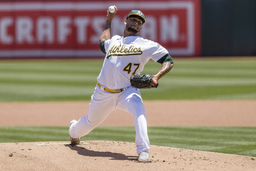 OAKLAND, Calif. (AP) Frankie Montas of the Oakland Athletics is pitching a no-hitter through seven innings against the Seattle Mariners.

Montas has thrown 84 pitches and the A's lead 1-0 Thursday at the Coliseum.

Montas has struck out eight and walked two.