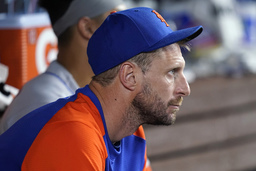 New York Mets pitcher Max Scherzer watches from the dugout during a baseball game against the Miami Marlins, Saturday, June 25, 2022, in Miami. The three-time Cy Young Award winner has been sidelined since May 19 because of an oblique strain. (AP Photo/Lynne Sladky)

''We'll see how he feels tomorrow,'' Mets manager Buck Showalter said after watching on video from Citi Field. ''Tomorrow, if he feels well, we'll probably be able to talk about that next step.''

A two-time Cy Young Award winner, the 34-year-old right-hander missed the second half of last season because of right forearm tightness. He returned and made spring training starts on March 22 and 27, then was sidelined by a stress reaction in his right scapula that caused inflammation. He did not throw another bullpen session until June 4.

''He hasn't had anything that has taken him off schedule so far,'' Showalter said. ''You can tell he's upbeat about where he is. The body language, more than anything.''

Scherzer, a three-time Cy Young Award winner, has been sidelined since straining his left oblique muscle while pitching against St. Louis on May 18. He was to make his second rehab start for the Double-A Binghamton Rumble Ponies on Wednesday night, taking the mound against the Hartford Yard Goats.

Scherzer threw 65 pitches last Tuesday for Binghamton against Reading, allowing two runs and three hits in 3 1/3 innings with six strikeouts and a walk.

After agreeing to a $130 million, three-year contract, baseball's highest average salary, Scherzer is 6-2 with a 2.54 ERA in eight starts.