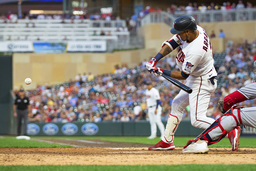 Minnesota Twins Luis Arraez swings into a three-run homer against the Cleveland Guardians in the seventh inning of a baseball game Tuesday, June 21, 2022, in Minneapolis. (AP Photo/Andy Clayton-King) 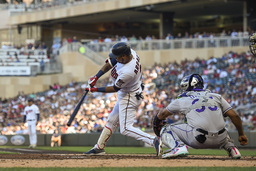 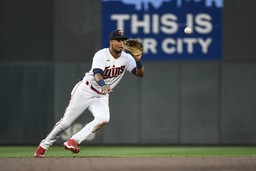 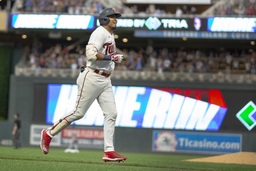 Minnesota Twins' Luis Arraez rounds the bases after hitting a three-run homer against the Cleveland Guardians in the seventh inning of a baseball game Tuesday, June 21, 2022, in Minneapolis. (AP Photo/Andy Clayton-King)

MINNEAPOLIS (AP) Just a few months into Luis Arraez's major league career, Cleveland manager Terry Francona marveled at the hitting machine division rival Minnesota was integrating into the lineup and predicted he would one day win a batting title.

''Can't put money on it, but I wish I could've,'' Francona said last week before the first of eight matchups between the AL Central front-runners in a 10-day span. ''I don't know if every year he'll hit .360, but you get your confidence, you get your legs under you, you feel good. You could see he had that ability. You could see it right away just the way he stood in the batter's box.''

Carrying an out-of-this-era .344 average into Wednesday, a 12-point lead on Boston's Rafael Devers in the AL, Arraez has made a strong case to make his first All-Star team when the complete rosters are revealed July 10.

''I've got good numbers. I think I need to get there,'' Arraez said. ''If not, I'm going to keep continuing to play hard and then try to help my team win the games.''

Thriving at the top of the order for the first-place Twins in front of Byron Buxton and Carlos Correa, Arraez had 27 multi-hit games through Tuesday for the most in the major leagues. Only St. Louis first baseman Paul Goldschmidt, who led the NL at .347 entering Wednesday, was ahead of Arraez in batting average. Goldschmidt was the only player with a qualifying amount of plate appearances in baseball with a better on-base percentage (.429) than Arraez (.426).

Arraez also led the majors in two-strike batting average (.302) and had the third-best plate appearances per strikeout rate (12.6) entering Wednesday. His longest stretch of at-bats without a hit this season is 11.

''He's the Rod Carew, the Tony Gwynn type of hitter, just trying to get on base for the guys behind him,'' Correa said. ''That's so much better in this game because he walks, too. He's not only collecting hits, he's reaching base over 40% over the time. That's very impressive. That holds a lot of value.''

At a time when he's hitting more than 100 points above the major league average, Arraez has naturally elicited comparisons to those pure hitters of generations past like Carew, Gwynn and Ichiro Suzuki.

Funny story about that: Both Carew and Ichiro have publicly declared Arraez their favorite hitter to watch these days. When the Twins were in Seattle earlier this month, Arraez got to hear the praise from Ichiro in person.

Signed as a 16-year-old out of Venezuela in 2013, Arraez has never not been a productive hitter. His .331 career minor league average, including the 2016 Midwest League batting title with Class A Cedar Rapids, can attest to that. In his first 12 at-bats after his first major league call-up in 2019, Arraez had seven hits.

What has helped Arraez become an even better version of himself this season has been healthy knees. They bothered him in 2020 and 2021 and required stints on the injured list. The Twins have also narrowed his range of positions in the field to primarily first base and second base. He has taken a few turns at third base, too, but he's no longer considered for left field.

''Staying on the dirt has helped him in some ways, just being able to take care of his body,'' manager Rocco Baldelli said. ''He does a good job of taking care of himself. The less we can bounce him around to the outfield and have him diving all over the place, and running into walls or potentially other players and things like that, I think that helps him. We want him in the lineup every day.''

With his deep crouch at the plate and forceful, compact swing, Arraez has consistently hit to all three fields - with only teammate Gio Urshela appearing in more games.

''I've worked hard for that. That's why I feel good,'' Arraez said. ''Just work hard. If I keep continuing my routine, I think I'll feel good there. I just try to do my best every time.''