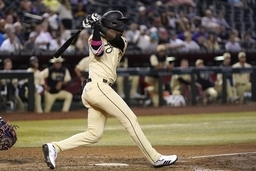 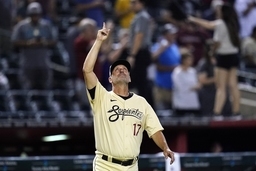 Arizona Diamondbacks manager Torey Lovullo points to the sky as he comes out of the dugout after the final out of the team's baseball game against the Colorado Rockies on Friday, Aug. 5, 2022, in Phoenix. The Diamondbacks won 6-5. (AP Photo/Ross D. Franklin) 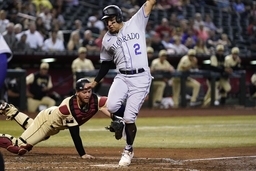 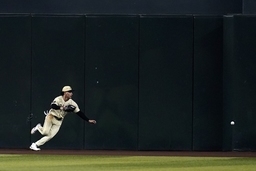 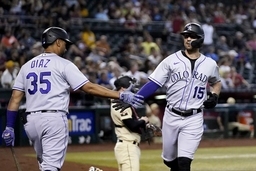 Colorado Rockies' Randal Grichuk (15) celebrates with Elias Diaz (35) after his home run against the Arizona Diamondbacks during the first inning of a baseball game Friday, Aug. 5, 2022, in Phoenix. (AP Photo/Ross D. Franklin) 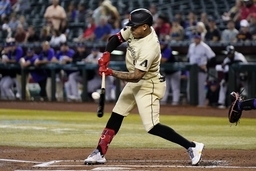 Arizona Diamondbacks' Ketel Marte connects for a run-scoring double against the Colorado Rockies during the first inning of a baseball game Friday, Aug. 5, 2022, in Phoenix. (AP Photo/Ross D. Franklin) 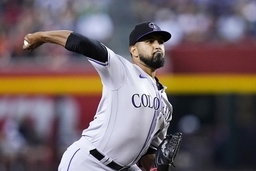 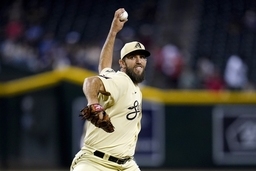 PHOENIX (AP) Geraldo Perdomo is a .200 hitter for the Arizona Diamondbacks who carries himself with the confidence of a .300 hitter.

The fake-it-till-you-make-it approach worked wonders Friday night. The shortstop hit a go-ahead, two-run single in the eighth inning, then made a terrific diving snag on a grounder in the ninth to preserve the lead, lifting the Diamondbacks over the Colorado Rockies 6-5 on Friday night.

''That's why I work hard, to make plays like that,'' Perdomo said. ''They give me the opportunity to play every single day and I try to prove to the organization what I have and what we have.''

The Rockies led 5-2 after six innings, but the Diamondbacks cut the deficit to 5-4 after Josh Rojas hit a two-run double in the seventh.

Arizona rallied again with one out in the eighth when Jake McCarthy hit a single and Emmanuel Rivera doubled to put runners on second and third. Carson Kelly grounded out, but Perdomo followed with a soft liner to right-center that just cleared the glove of leaping second baseman Brendan Rodgers.

''The guys kept fighting,'' Arizona manager Torey Lovullo said. ''That's what I was proud of.''

Perdomo followed in the ninth with a fantastic defensive play, diving for a grounder up the middle by C.J. Cron, before jumping to his feet and firing across the diamond for the second out of the inning.

Alex Colome (2-5) took the loss, giving up the two eighth-inning runs. Chris Devenski (1-0) got the win with a scoreless eighth. Ian Kennedy worked the ninth for his sixth save.

The D-backs' rally ruined another quality outing for Rockies starter German Marquez, who has thrown well over the past month after a slow start to the season. The right-hander gave up two runs on four hits, walking three and striking out three.

The Rockies put together a three-run sixth inning to break a 2-all tie. Rookie Elehuris Montero hit a single to left field during the rally - bringing home Randal Grichuk and Yonathan Daza - for the first two RBIs of his brief career.

The Rockies had 12 hits and looked in control for much of the night, but the bullpen couldn't hold the advantage.

''This was a tough one,'' Rockies manager Bud Black said. ''The guys (in the bullpen) have been pretty consistent, especially the last couple months. But it goes to show you, every player is not invincible.''

Arizona starter Madison Bumgarner gave up five runs, including four earned, over 5 2/3 innings. He surrendered 10 hits, walked one and struck out two.

Daulton Varsho had a solo homer for the D-backs in the fourth. It was his 15th homer of the season.

The Diamondbacks had a moment of silence before Friday's game for Nicole Hazen and Dodgers announcer Vin Scully.

Hazen, the wife of D-backs GM Mike Hazen, died on Thursday from complications due to glioblastoma, a form of brain cancer. She was 45. The couple has four sons.

Lovullo pointed to the sky after the win. He added that ''it's been a rough couple of days for me personally. I think there's a little piece of Nicole Hazen in this win today.''

Scully also died on Thursday at the age of 94. The Hall of Famer spent 67 years as a broadcaster for the Dodgers in both Brooklyn and Los Angeles.

Bumgarner was pitching with umpire Dan Bellino at third base. The two have recent, unpleasant history.

Bellino ejected Bumgarner after the first inning of a game against the Miami Marlins on May 4, following a routine check of the pitcher's hands and glove for sticky substances. The awkward exchange included Bellino staring at Bumgarner for several seconds while checking his hand, then heated words between the two before the ejection.

Bellino later apologized for the exchange, which is rare for an MLB umpire. Bumgarner wanted no part of Bellino on Friday, intentionally avoiding him and having his hand and glove checked by home plate umpire Mark Ripperger instead.

The teams play again Saturday night. The Diamondbacks will throw RHP Merrill Kelly (10-5, 2.87 ERA), who will take the mound for the first time since winning NL Pitcher of the Month for July. The Rockies will counter with RHP Antonio Senzatela (3-6, 4.87).