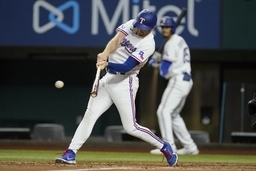 Texas Rangers' Brad Miller connects for a single against the Oakland Athletics during the fourth inning of a baseball game in Arlington, Texas, Monday, Aug. 15, 2022. (AP Photo/Tony Gutierrez) 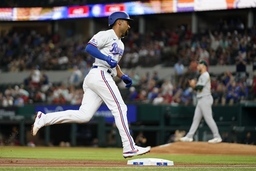 Oakland Athletics' Nick Allen runs the bases after hitting a solo home run against the Texas Rangers during the third inning of a baseball game in Arlington, Texas, Monday, Aug. 15, 2022. (AP Photo/Tony Gutierrez) 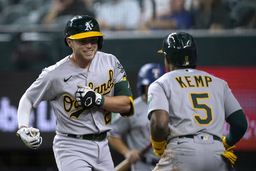 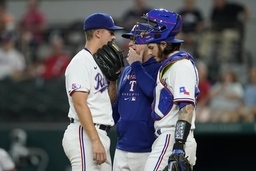 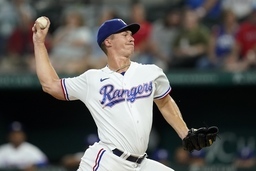 With Tony Beasley managing his first big league game, after being named the interim manager for the final 48 games of the season, the Rangers overcame nine walks by their pitchers in a 2-1 win over the last-place Oakland Athletics on Monday night.

''Yeah, it was nerve-wracking. It was a one-run ball game, and so every pitch mattered, every play mattered,'' Beasley said. ''Walks creating opportunities for the other team to score, we persevered and somehow got through it.''

In the end, Beasley said it was fun, with good energy in the dugout and players responding after a long day of significant change. The Rangers entered the game 6-24 in one-run games.

Woodward, who was in his fourth season and two games shy of his 500th game as manager, was let go with the Rangers (52-63) on pace for their sixth consecutive losing season. He was the fourth big league manager fired this season.

Nick Allen homered for the last-place A's, who lost their ninth game in a row.

The Rangers actually have their first three-game winning streak in more than two months - since June 11-13. They completed a series victory against Seattle over the weekend by winning what were Woodward's final two games, giving him a 211-287 record.

Beasley is the longest-tenured member of the Rangers coaching staff in his eighth season. He had a 590-472 record in eight seasons as a minor league manager in the Washington (2011-13) and Pittsburgh (2001-05) organizations.

''Obviously, we're all very thankful for everything that Woody's poured into us,'' winning pitcher Glenn Otto said. ''Very lucky to have Tony Beasley ready to keep working, and hopefully make these next six weeks really mean something.''

Otto (5-8) went six innings for his first victory since June 4 despite a career-high six walks, including the game's first two batters. The young right-hander was 0-6 his last nine starts. His only strikeout was against the last batter he faced, and the homer was one of only two hits allowed.

''We had (runners on) first and second in the first inning and the double play ball really bailed them out there. Offensively, we got three hits tonight, and you're not going to win many games when you get three hits, no matter if you have nine walks,'' A's manager Mark Kotsay said. ''Offensively, we just didn't do enough tonight to score enough for us to win a baseball game.''

Jonathan Hernandez overcame two walks in the ninth for his fourth save in as many chances.

James Kaprielian (3-7) struck out five and walked one over 5 1/3 innings. He was pulled after Leody Taveras had a one-out triple in the sixth.

''He had swing-and-miss stuff tonight ... he was in the zone,'' Kotsay said. ''They did have some some at-bats that they had some hard contact.''

Taveras went to third on reliever Sam Moll's errant pickoff throw, then scored when Thompson hit a sharp grounder through the right side of the infield.

Semien tied the game at 1 with his 18th homer in the bottom of the third. All of his homers have come over the past 71 games since May 28.

Allen, Oakland's No. 9 batter, lined a homer just over the wall in left-center leading off the third. The rookie infielder has gone deep in back-to-back games after only one homer his first 54 career games.

Taveras ran a long way to make a leaping catch on the warning track in straightaway center on Cal Stevenson's drive that ended the seventh inning. ... Stevenson, the Oakland center fielder, also had a highlight play with a diving catch on Corey Seager's sinking liner in the left-center gap in the third. ... Thompson, in his 10th big league game, had a running, sliding catch of Tony Kemp's popup to shallow left in the third.

Rangers 1B Nathaniel Lowe extended his on-base streak to 21 games in a row with a single in the third. That is the longest active streak in the majors, and four short of his career high. That came right after Adolis Garcia singled. Garcia's 12-game hitting streak is the longest of his career, and the longest by a Texas player this season.

Athletics: OF Ramon Laureano (left side soreness) was out of the lineup a day after he felt discomfort on a swing during his at-bat in the fourth inning at Houston, and left that game.

Left-hander JP Sears (3-0, 2.30 ERA) makes his second start for Oakland since being acquired from the Yankees in the deal that sent Frankie Montas to New York. He got a no decision in his A's debut.