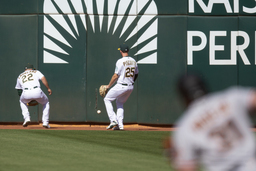 OAKLAND, Calif. (AP) The Oakland Athletics released veteran outfielder Stephen Piscotty on Tuesday and cleared way for top prospect Shea Langeliers to gain key experience down the stretch for the last-place team in the AL West.

Langeliers, a 24-year-old catcher and left fielder selected ninth overall in the 2019 draft out of Baylor, hit .283 with 19 homers and 56 RBIs in 92 games for Triple-A Las Vegas after being acquired from Atlanta in the March trade that sent Matt Olson to the Braves. Langeliers was expected to make his major league debut as designated hitter for the A's at Texas on Tuesday night.

General manager David Forst thanked 31-year-old Piscotty for his impact on the club dating to his arrival ahead of the 2018 season in a trade from St. Louis that brought him back close to his home in Pleasanton. His mother, Gretchen, died in May that year from Lou Gehrig's disease and Piscotty helped raise awareness for ALS. Major League Baseball held its first Lou Gehrig Day last year.

He helped lead the A's back to the playoffs in 2018 after a three-year drought with career highs of 27 home runs and 88 RBIs.

''I want to acknowledge Stephen Piscotty first and just talk a little bit about his time here, which came at a really important time for us when we made that trade at the end of 2017,'' Forst said in a conference call. ''I appreciate everything that Stephen gave us both on and off the field in his time here.''

Oakland also recalled David MacKinnon from Las Vegas. The A's also placed center fielder Ramon Laureano on the injured list with left side soreness. He was out of the lineup Monday a day after he felt discomfort on a swing during his at-bat in the fourth inning at Houston and exited.

Laureano was scheduled for an MRI exam Tuesday. He will be examined by a team doctor back in the Bay Area, Forst said.

Sean Murphy will remain the starting catcher and Forst said manager Mark Kotsay planned to speak with Murphy, veteran Stephen Vogt and Langeliers about playing time for the remainder of the season.