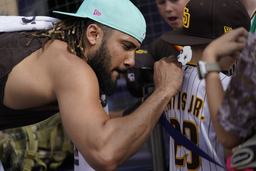 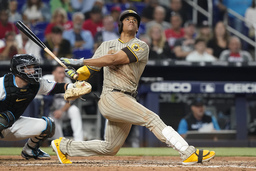 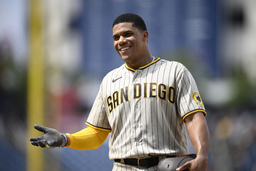 San Diego Padres' Juan Soto reacts at first base during the ninth inning of a baseball game against the Washington Nationals, Sunday, Aug. 14, 2022, in Washington. (AP Photo/Nick Wass) 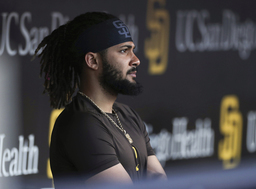 San Diego Padres' Fernando Tatis Jr. looks out from the dugout prior to the team's baseball game against the Philadelphia Phillies on June 25, 2022, in San Diego. Tatis was suspended 80 games by Major League Baseball on Friday, Aug. 12, after testing positive for a performance-enhancing substance. The penalty was effective immediately, meaning the All-Star shortstop cannot play in the majors this year. Tatis had been on the injured list all season after breaking his left wrist in spring training. (AP Photo/Derrick Tuskan, File)

Tatis, a 23-year-old sensation and one of the brightest stars in all of Major League Baseball, was on the cusp of returning to the Padres from a broken wrist that had sidelined him all season. He was on track to rejoin the team well before the Sept. 7 bobblehead night - until the positive test.

Instead, the Padres will offer fans shirts in the club's City Connect color scheme with Soto's name and No. 22 on the back before they play the Arizona Diamondbacks. The team announced the change Tuesday.

Soto, also 23 and one of baseball's most well-known young faces, was acquired from the Washington Nationals in a blockbuster deadline deal Aug. 2.

The Padres' City Connect jerseys, which they wear for Friday night home games, feature vivid colors that celebrate the cross-border culture of San Diego and Tijuana.

MLB said Tatis tested positive for Clostebol, an anabolic steroid. Tatis said he accidentally took a medication to treat ringworm that contained the banned substance. Several teammates were critical of Tatis following Friday's announcement, including pitcher Mike Clevinger, who talked about being ''disappointed'' in Tatis and hoping the shortstop realizes ''it's about more than just him right now.''