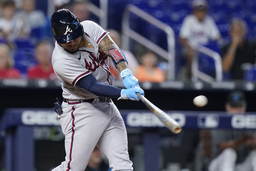 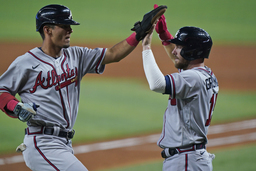 Atlanta Braves' Vaughn Grissom, left, and Robbie Grossman congratulate each other after they both scored on a double by Chadwick Tromp during the fourth inning of the first game of a baseball doubleheader against the Miami Marlins, Saturday, Aug. 13, 2022, in Miami. (AP Photo/Wilfredo Lee)

Tarnok gives the Braves a fresh arm with the team in the midst of playing 14 games in 13 days. Atlanta trailed the NL East-leading Mets by 4 1/2 games.

It was a tough blow for left-hander Danny Young, who pitched 2 2/3 scoreless innings in his Atlanta debut Monday night. He was optioned back to Triple-A Gwinnett after the 13-1 victory and designated for assignment so the Braves could call up a much-needed backup infielder.

The 34-year-old Goins last played in the big leagues with the Chicago White Sox in 2020. His best season in the majors came with Toronto in 2017, when he hadnine homers and 62 RBIs.

The Braves also placed third catcher Chadwick Tromp on the 10-day injured list with a strained left quadriceps. The move is retroactive to Saturday, when Tromp played his first game for Atlanta in a doubleheader and went 3 for 4 with two doubles and three RBIs.

Despite that splashy debut, Tromp is likely headed back to Triple-A as soon as he's healthy now that Travis d'Arnaud has recovered from a lower leg injury.

The Braves went several games with only four infielders on the big league roster. Goins, who can play second base, shortstop and third base, gives them a bit of insurance. He was hitting .221 with no homers and 18 RBIs in 72 games for Triple-A Gwinnett.

Tarnok, a 23-year-old right-hander, is rated as one of Atlanta's top prospects. He started the season at Double-A Mississippi, where he was 2-2 with a 4.31 ERA in 15 starts. He is 1-0 with a 2.03 ERA in five starts since being promoted to Gwinnett.

Tarnok's first appearance with Atlanta will be his big league debut.