Reds 1B Votto to have season-ending rotator cuff surgery 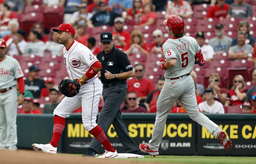 Cincinnati Reds first baseman Joey Votto, left, gets an out at first on Philadelphia Phillies Bryson Stott during the first inning of a baseball game in Cincinnati on Tuesday, Aug. 16, 2022. (AP Photo/Paul Vernon)

Votto, who turns 39 next month, said he got hurt when he got tangled up with a baserunner in 2015. He played through the injury, but it has gotten worse this year.

''I don't know how to explain it but it's been lingering for a while,'' Votto said after Cincinnati's 1-0 victory over Philadelphia on Wednesday.

''I'm not sure if it's affected my performance,'' he said. ''I can't say that. I don't want to make an excuse but surgery is necessary. I plan on getting it done on Friday. I've been told that it is a six-month rehab.''

Votto said he got an MRI about 10 days ago.

''I've played through lots of different stuff,'' he said. ''I was motivated to get an MRI because of the pain, the interruption of my sleep. It was difficult to lift my arm.

''It didn't surprise me the result. The feedback that I needed to get surgery surprised me. I tried strength training. It didn't work.''

Votto was selected by Cincinnati in the second round of the 2002 amateur draft. He broke into the majors with the Reds in 2007 and quickly became one of the majors' most feared hitters.

Votto's surgery comes with the Reds heading toward the end of a difficult season. They improved to 46-70 with the victory over Philadelphia.

''We are going to miss him a ton,'' Reds manager David Bell said. ''I have no idea how he was playing with it; trying to play this game with a torn rotator cuff. I was lucky enough to talk to the doctors. They were very clear, this has to get done to get Joey back healthy for next season. That's what I'm looking for, looking for Joey to play pain-free. This is the best way to make sure that happens.''