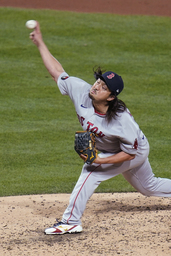 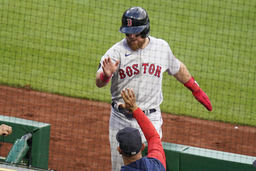 Boston Red Sox's Christian Arroyo, top, is greeted as he returns to the dugout after scoring on a hit by Like Hernandez during the second inning of a baseball game Wednesday, Aug. 17, 2022, in Pittsburgh. (AP Photo/Keith Srakocic) 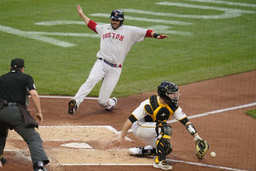 Boston Red Sox's J.D. Martinez comes home to score as Pittsburgh Pirates catcher Jason Delay gets the throw on a double by Christian Arroyo during the second inning of a baseball game Wednesday, Aug. 17, 2022, in Pittsburgh. (AP Photo/Keith Srakocic) 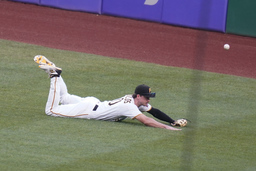 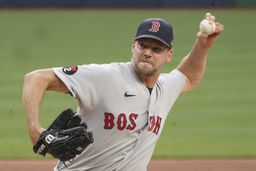 The Red Sox won for the fifth time in six games and got back to .500 at 59-59. Boston is four games behind Toronto in the race for the third and final AL wild-card spot.

Arroyo hit a two-run double and scored on Kike Hernandez's sacrifice fly in the second inning as Boston went ahead for good 3-2. Arroyo also singled in a run in a three-run ninth that broke the game open.

Over the last two weeks, Arroyo has emerged as the Red Sox's regular second baseman. The utility infielder has started the last 10 games at the position.

Verdugo was 3 for 3 with two walks from the cleanup spot.

''Alex did a really good job today, he recognized patterns, put together good swings and was patient in certain at-bats,'' Boston manager Alex Cora said. ''Arroyo had some really good at-bats. It was a good one for us.''

Cora was especially pleased that the Red Sox drew seven walks. Verdugo helped boost that total on a night when the Pirates never got him out.

''I feel good, I feel locked in, I feel like I am staying with my approach and not deviating from it,'' Verdugo said. ''I'm just looking for a pitch to drive, taking the close (pitches) then when two strikes comes we're just battling.''

Hill (5-5) allowed two runs on three hits in five innings for his first win since June 26. He struck out four and walked none. The left-hander was making his third start since missing a month with a sprained left knee.

The last time Hill pitched at PNC Park, he took a no-hitter into the 10th inning for the Los Angeles Dodgers on Aug. 23, 2017, before Josh Harrison hit a game-ending home run.

Hill didn't flirt with immortality this time. Kevin Newman led off the first inning with a single and Bryan Reynolds followed with a two-run home run into the bullpen in center field. The Pirates didn't score again until the ninth inning as their losing streak reached six games. Reynolds had two hits.

As an 18-year veteran, Hill was able to keep his composure after the rough start.

''They got two hits, two runs and he knew he had to slow down and then he did amazing job,'' Cora said.

Quickly down 2-0, Hill bounced back to retire the next 12 batters before Rodolfo Castro singled leading off the fifth inning. The Red Sox went ahead 3-2 an inning later.

''It was efficient, we got a lot of action within the first three pitches (of an at-bats) and (shortstop Xander Bogaerts) was outstanding with his Gold Glove defense,'' Hill said. ''It was good to stay within the parameters of the game and give us a chance to win after the way the game started. I think it was a case of buckling down and staying in the moment.''

The Red Sox made it 4-2 on Verdugo's RBI double in the fifth.

Rookie Roansy Contreras (3-3) was called up from Triple-A Indianapolis prior to the game and allowed four runs on six hits in six innings with four walks and three strikeouts. He had been sent to the minor leagues July 7 to limit his innings pitched.

''He gutted his way through six innings,'' Pittsburgh manager Derek Shelton said. ''It just shows he has really good stuff. He was able to navigate his way through a good lineup by manipulating his slider on a night when he was inconsistent with his fastball.''

Boston broke the game open in the final two innings. Pinch-hitter Rob Refsnyder drew a bases-loaded walk from Eric Stout in the eighth and then Kevin Plawecki hit a two-run double in the ninth to increase the lead to 8-2.

Ben Gamel hit an RBI single for the Pirates in the bottom of the ninth.

The Red Sox scratched right-hander Nathan Eovaldi from his scheduled start Thursday night against the Pirates because of tightness in his shoulder area. Rookie Josh Winckowski will take his place.

Cora said the Red Sox were just being cautious and Eovaldi has been slotted to pitch next Tuesday against Toronto in Boston.

Red Sox: LHP James Paxton is expected to make his first rehab start Thursday in the Florida Gulf Coast League. After undergoing Tommy John elbow ligament replacement surgery last year, Paxton signed with Boston as a free agent in December. . LHP Matt Strahm (left wrist contusion) is expected to join the team Thursday and could be activated from the injured list then . Bogaerts (bruised right shin) returned to the lineup after sitting out Tuesday.

Pirates: C Tyler Heineman (right groin strain) was activated from the 10-day DL, C Jose Godoy was optioned to Indianapolis and RHP Austin Brice was designated for assignment. . RHP Mitch Keller played catch a day after being removed from his start after two innings because of shoulder fatigue. . RHP David Bednar (low back inflammation) may be able to start playing catch by the weekend. . Though out for the season following hamstring surgery, C Roberto Perez has been cleared to participate in baseball activities and is hopeful of playing winter ball.

Red Sox: Winckowski (5-5, 4.69) will try to help Boston sweep the three-game series. He is 2-0 with a 3.45 ERA in his last three starts after losing his previous four outings.